August 30, 20201; New Orleans, LA, USA; Dartanian Stovall’s house that collapsed with him inside during the height of Hurricane Ida in New Orleans. Stovall was inside the house he was renovating on Lasalle Street in the Uptown neighborhood when he said the chimney collapsed and the rest of the house followed. He managed to crawl to safety and despite the loss of the home said, At least I m alive. Mandatory Credit: Michael DeMocker-USA TODAY NETWORK

The team evacuated roughly 160 people to Dallas on Friday night ahead of looming Hurricane Ida, which also caused the cancellation of the Saints’ final preseason game Saturday night against the Arizona Cardinals.

While the team is able to practice in the Cowboys’ AT&T Stadium this week, backup plans are being considered in the event New Orleans won’t be recovered enough to host the Saints’ opener on Sept. 12 at home against the Packers. The city is without power in the aftermath of the massive hurricane, which made landfall in Louisiana as a Category 4 storm with winds of 150 mph on Sunday. 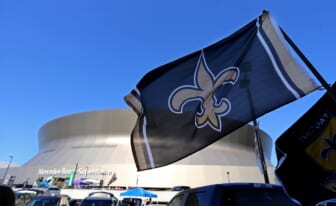 “We don’t know relative on Week 1 in the Superdome,” Payton said, via NewOrleans.Football. “We’ll have a Plan B. There’s a lot of things from a priority standpoint that are more important to our city.”