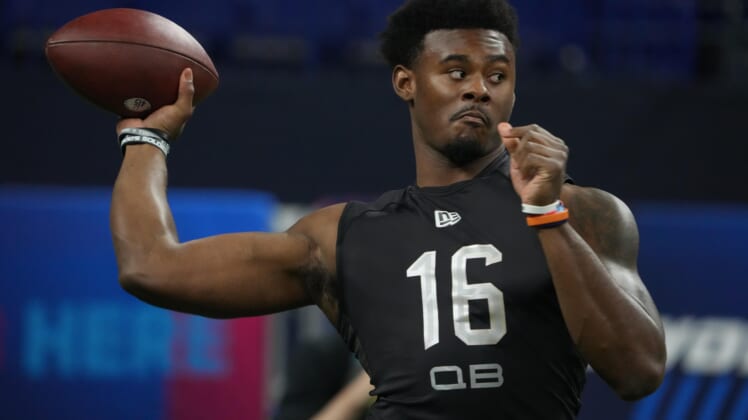 The New Orleans Saints quarterback position is unsettled with Jameis Winston and Andy Dalton the only options on the roster. However, general manager Mickey Loomis could be planning to shake things up in the 2022 NFL Draft.

There isn’t an unquestioned star-level quarterback available this draft cycle. A year after a passer-heavy rich 2021 class headline by Trevor Lawrence, Mac Jones, Zach Wilson and Justin Fields, the options are bleaker this time around.

However, it hasn’t stopped the 2022 signal-callers from moving up draft boards. Malik Willis offers the highest ceiling, Kenny Pickett could be a safe starter and Desmond Ridder might be the most pro-ready quarterback available.

After already swinging one big draft trade, acquiring the 16th and 19th overall picks from the Philadelphia Eagles, another could be on the horizon.

According to NFL insider Jordan Schultz, multiple league sources disclosed that the Saints are high on both Willis and Pickett. The interest is strong enough that New Orleans is considering moving up to secure one of them.

What would it cost the New Orleans Saints to move up for a quarterback?

Based on the Fitzgerald-Spielberger NFL Draft trade value chart, created by OvertheCap.com, the Saints have the ammunition to move up for one of the top-10 picks on April 28.

The New York Jets (4th and 10th overall picks) and New York Giants (5th and 7th overall picks) are both interested in trading one of their premium selections this year. While they would seemingly be an option, they also reportedly are prioritizing a deal that would net a 2023 first-round pick.

New Orleans will be keeping an eye on the Carolina Panthers, holding the 6th pick with a strong need for a quarterback. Packaging the 16th and 19th pick equates to enough point value to snag New York’s 5th overall selection. It would allow the Saints to jump ahead of Carolina for their choice at quarterback.

If the organization views them on an equal tier, the smarter play could be to exercise patience. The price will drop with each pick that passes and moving into the 7-10 range would be more affordable.

As for the quarterbacks, Willis is higher on Sportsnaut’s NFL Draft big board. He shouldn’t see the field in 2022 given he is an unrefined passer who needs significant NFL coaching. That’s why the Saints’ situation is a logical fit. He can sit behind Winston and Dalton, learning for a year, then take the field in 2023.