The New Orleans Saints have reached an agreement to restructure the contract of star running back Alvin Kamara.

On Friday, ESPN NFL Insider Field Yates reported the news of the team and their five-time Pro Bowler coming to terms on a restructured deal. The revised pact will help to alleviate some of the contractual excesses they have on their 2022 salary cap number. Before the move, the Saints were over $24 million above the salary cap for next season.

“The Saints have converted $10.465M of RB Alvin Kamara’s 2022 compensation into a signing bonus, creating $8.372M in 2022 cap space, per source. New Orleans continues to get closer to being under the cap,” Yates tweeted.

Kamara, 26, is in the midst of a five-year, $75 million dollar deal he signed in 2020. The team’s ability to fork over nearly $11 million upfront in a fat signing bonus check is no easy thing to do. In a tweet on Friday, The Times-Picayune and NOLA.com Columnist Jeff Duncan explained that the franchise is able to make such a move because of a current deal they have with the state. Something many other smaller market teams do not have.

“The Saints’ annual salary-cap gymnastics are possible largely because the team has the cash flow to make it happen,” Duncan wrote. “This wasn’t the case years ago and isn’t the case for many of their small-market peers. The Saints’ lucrative deal with the state of La. is a major facilitator.”

Kamara is likely trying to stay on the team’s good side following his arrest in Las Vegas last month, hours after his appearance in the annual NFL Pro Bowl game. Kamara and four other men, including Kansas City Chiefs cornerback Chris Lammons, were booked on charges of battery following an altercation at The Cromwell Casino. 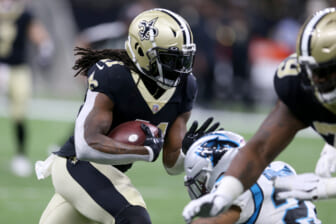 On Thursday, Kamara’s first court hearing on the arrest was pushed back to April.