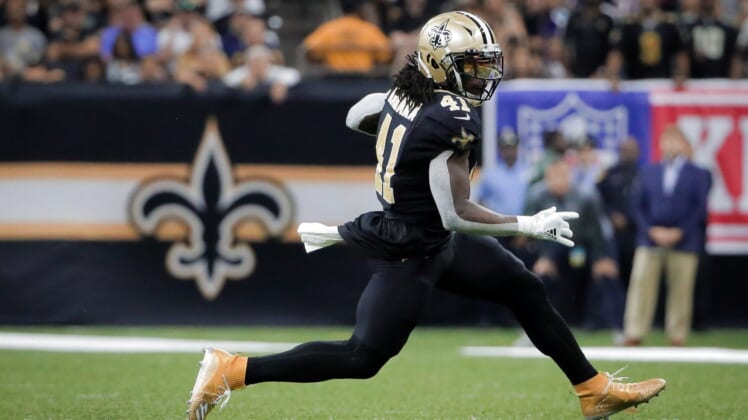 The New Orleans Saints made headlines on Tuesday by putting star running back Alvin Kamara on the trade block amid his contract holdout. Now, with Kamara set to return to training camp on Wednesday, both sides could be working towards a contract extension.

Kamara, one of the NFL’s top 100 players, missed the past four days of practice and it was reported his absence was contract related. With their star not taking the field, New Orleans seemed prepared to trade Kamara before the regular season.

The NFL world lit up with trade rumors when news broke that Kamara could be on the move. However, it quickly became clear that New Orleans wants to keep him and believes he is a core piece to its future.

Since he was missing practice and the organization believed he was holding out, the Saints created some leverage in negotiations by floating his name in trades. Just a day later, it looks like there’s increasing reason to believe both sides will get something done.

While it was initially reported that Kamara is looking to match Christian McCaffrey’s record-setting contract, the NFL star has reportedly lowered his asking price. Instead, he is seeking a multi-year extension worth around $14-15 million.

Notably, per Fowler, four teams inquired with the Saints about a trade for Kamara. According to The Athletic’s Larry Holder, New Orleans wants a first-round pick back in order to move their All-Pro running back.

Kamara told reporters on Tuesday that he recently received an epidural in his back, which caused his absence from practice. He will be back with the team on Wednesday and it seems increasingly likely that a contract will get done.

Alvin Kamara’s stats prove Saints should extend him, not trade him

Kamara wasn’t nearly as explosive during the 2019 season as we saw in his first two years in the NFL. He played through knee, ankle and back injuries, including a torn MCL, which limited his game-changing ability and impacted his on-field performance.

Yet, Kamara’s stats this past season were impressive under the circumstances. He averaged 4.7 yards per carry, recorded his third consecutive season with 81 receptions and finished with 1,330 scrimmage yards in 14 games.

New Orleans knew it didn’t have the best version of Kamara in 2019, but it knows how important he is to this offense. When he was healthy last year, he carried the Saints to a win over the Seattle Seahawks with 161 total yards and two scores and looked explosive in a season-opening win over the Houston Texans with 169 scrimmage yards.

After his first two seasons, Kamara had already accounted for 31 total touchdowns in his career. He finished with only six scores this past season, but will likely score double-digit touchdowns in 2020 with positive regression and improved health.

He is a far better player than David Johnson ($13 million) and Le’Veon Bell ($13.1 million salary). At the very least, Kamara should likely land $14 million per season on his contract extension, which would make him the third-highest-paid running back in the NFL.

The Saints are taking a win-now approach this season with Drew Brees at quarterback and heavy investments into this roster to win Super Bowl LV. Not only is Kamara crucial to this team’s title hopes this year, but he may play an even bigger role in the future once Brees retires.

In the end, the Saints are far better off closing the cap in contract negotiations and making a deal that makes everyone happy. Quite simply, a trade only makes this team worse and goes against everything they have built towards coming into this season.