The New Orleans Pelicans and Memphis Grizzlies have swung a blockbuster trade, swapping centers Steven Adams for Jonas Valanciunas in a multi-player and pick deal.

Reports first surfaced Sunday that the two sides were discussing a deal to send Eric Bledsoe and the No. 10 pick for the 17th selection in the 2021 NBA Draft. With the Pelicans seeking to make a big move in free agency, they have swung a deal to create significant cap space.

According to ESPN’s Adrian Wojnarowski, New Orleans is sending Bledsoe, Adams, the 10th pick, 40th pick and a protected Los Angeles Lakers first-round pick to Memphis. In exchange, the Grizzlies will send Valanciunas and the No. 17 and 51 picks to the Pelicans. 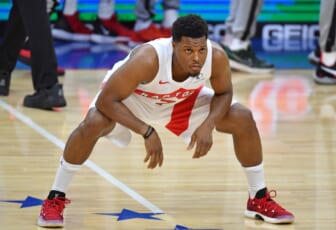 The Pelicans acquire Adams and Bledsoe before the 2020-’21 NBA season in a blockbuster four-team deal. Adams later signed a two-year, $35 million extension with the franchise.

Valanciunas will provide New Orleans with better floor spacing alongside Zion Williamson, who the team is hoping to convince it can build a playoff team around. If the Pelicans can’t land Lowry, it could match any offer restricted free-agent Lonzo Ball receives.