The 2022 New Orleans Pelicans draft includes the No. 8 overall pick stemming from their trade of Anthony Davis to the Los Angeles Lakers years back.

Fresh off a surprising playoff appearance, there’s a ton of opportunities for front office head David Griffin and Co. to pursue. They could use that selection to find a proven player next to the core three of Brandon Ingram, Zion Williamson and C.J. McCollum. They could also simply make a selection.

Before we delve into the Pelicans draft, let’s check in on the picks that they boasts in the annual NBA Draft later this month.

New Orleans Pelicans trade back into the first round

Boasting a whole bunch of future first-round picks, the Pelicans can afford to move both of their second rounders and change to trade back into the first round come draft time. It will help Griffin find a happy medium between short-term contention and long-term relevance.

In this scenario, we suggest that New Orleans offers up its two second-round picks and a future second-round selection to the Oklahoma City Thunder for the 30th overall pick.

With said selection, New Orleans opts for a high-upside guard in Malaki Branham from Ohio State. He starred for the Buckeyes as a freshman last season (13.7 PPG, 50% shooting, 42% 3-point). Branham could actually crack the Pelicans’ roster as a rookie given his three-point shooting ability.

Hayes was bandied about as a potential trade option ahead of the February 10 deadline. The Pelicans pushed back against including him in the deal for C.J. McCollum with the Portland Trail Blazers.

Fast forward several months, and it makes sense for the Pelicans to sell high on th 22-year-old big man. He averaged 9.8 points and 4.5 rebounds a season ago. But there’s no real path to the starting lineup with Zion Williamson and Jonas Valanciunas as the bigs in Nola.

If the Pelicans can get a top-20 selection for the still-young Hayes, they will have to think long and hard about it. Perhaps, the Charlotte Hornets (15th overall) come calling. They are in need of more bigs. A deal of this ilk would also include New Orleans adding veteran center Mason Plumlee in a swap of salaries. And with said selection, the Pelicans take a potential point guard of the future in Blake Wesley from Notre Dame.

Alas, New Orleans opts to move off the lottery pick they acquired from Los Angeles for an immediate-impact performer. Point guard remains a major need given Devonte’ Graham’s struggles a season ago.

The Pelicans also have contracts to offer up in order to make a potential blockbuster work. That includes Larry Nance Jr. ($9.6 million), Garrett Temple ($5.1 million) and Graham ($11.5 million).

Just how good would a lineup consisting of Brogdon, McCollum, Ingram, Williamson and Jonas Valanciunas be? That has conference title contention written all over it. 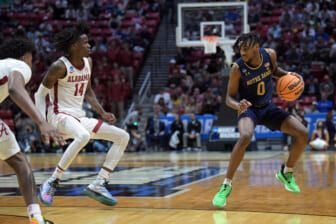 Let us know what you think about our New Orleans Pelicans draft preview in the comments section below.