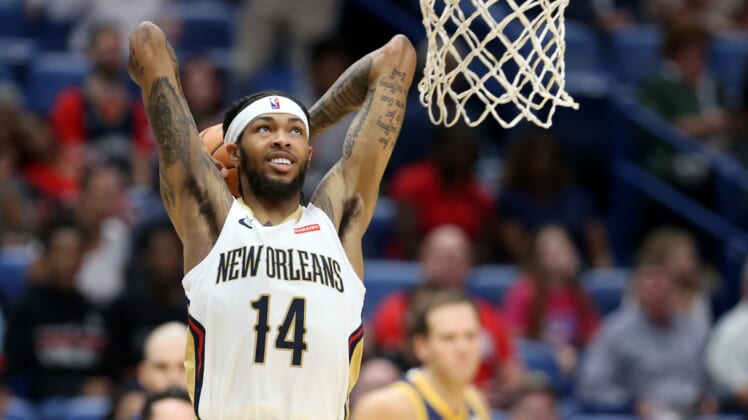 The New Orleans Pelicans knocked out a massive offseason priority on Tuesday by signing Brandon Ingram to a max contract extension that runs for five years and is worth $158 million.

Executive vice president of basketball operations David Griffin got the job done to reward Ingram with the lucrative payday, and it’s hardly a surprise, considering the 23-year-old is coming off a 2019-20 season that saw him win the NBA’s Most Improved Player award.

Brandon Ingram contract: How the Pelicans are building a playoff contender

ESPN insider Adrian Wojnarowski dropped yet another “Woj Bomb” to break the news of Ingram’s signing. It comes on the heels of an eventful offseason for New Orleans, who traded All-Star guard Jrue Holiday to the Milwaukee Bucks as part of a four-team blockbuster swap.

Given the fact that Ingram possesses immense athleticism, defensive versatility and plenty of upside still to explore, it makes sense for the Pelicans to use him and 2019 No. 1 overall pick Zion Williamson as the primary pillars for the organization to build a championship roster around. Ingram’s ball-handling ability had to have made it easier for New Orleans to stomach shipping Holiday away to Milwaukee, too.

Between Ingram, Zion and newly acquired center Steven Adams (h/t ESPN), the Pels boast a scary mix of size and quickness for the rest of the West to deal with. This strategy to load up the frontcourt had to be in response to the big-laden Los Angeles Lakers’ run to the NBA championship, not to mention the fact that New Orleans allowed 117.1 points per contest during the 2019-20 campaign.

A change of scenery really did Ingram well. No longer having to share the spotlight with LeBron James as a member of the Lakers, Ingram became much more ball-dominant and assertive in his first year with the Pelicans. The results were a raging success. Ingram proceeded to notch career-high averages in the key categories of points (23.8), rebounds (6.1), assists (4.2) and steals (1.0).

Most encouraging about Ingram’s evolution en route to the Most Improved Player hardware was his expanded shooting range. After averaging only 1.8 attempts from 3-point range in each of the prior two seasons, he hoisted 6.2 attempts per contest from beyond the arc and connected at an impressive 39.1% clip. Plus, his free throw percentage shot up from the high-60s to 85.1%.

Ingram has a freakish 7-foot-3 wingspan, suggesting he can continue getting his hands in passing lanes, generate turnovers for fast-break opportunities and become a better rim protector and on-ball defender. Few players are as good in transition as Ingram’s teammate Lonzo Ball, and as Zion continues to tap into his defensive upside and Adams asserts himself on that end of the floor, Ingram should only have freer rein to expand his all-around game.