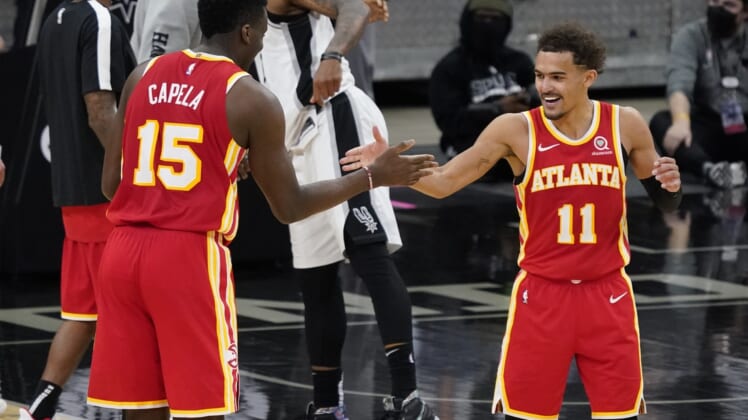 The Atlanta Hawks and the New Orleans Pelicans both played overtime Thursday night.

Both will be tired when they complete back-to-backs with a Friday night matchup in New Orleans.

The Hawks needed two overtimes to earn a 134-129 victory over the host San Antonio Spurs. The Pelicans lost to the visiting Orlando Magic 115-110 in one overtime on Thursday.

On Thursday, Atlanta’s John Collins missed his first game of what is expected to be a one-week absence because of a sprained left ankle sustained against the Phoenix Suns on Tuesday. De’Andre Hunter is expected to miss his fifth straight game Friday because of a sore right knee.

In their absence against San Antonio, five Hawks scored in double figures, led by Clint Capela with 28 points and 17 rebounds and Trae Young with 28 points and 12 assists. Young, who tweaked his knee in the first half and finished with seven turnovers, had 15 points in the overtime periods.

“I saw a kid that is showing growth,” Atlanta coach Nate McMillan said of Young. “We’ve been in games like that where we’ve had leads and we’ve lost those games. To be able to win this game in double overtime on the road, for this young point guard, it just shows some growth.”

Atlanta’s Bogdan Bogdanovic also finished with 28 points, making 4 of 5 3-point attempts. Lou Williams made his Hawks debut after being acquired from the Clippers in a trade last week and had seven points and five assists in 22 minutes off the bench.

“He’s a super humble dude,” Young said of Williams. “All he cares about is winning and what he brings to the table is scoring and obviously passing. Y’all saw what he was doing tonight. He can pass.”

New Orleans played without three starters — Zion Williamson (thumb), Brandon Ingram (toe) and Lonzo Ball (hip flexor) — on Thursday but hope to have one or more of them back Friday.

The trio combine to average more than 64 points, 16 rebounds and almost 14 assists. In their absence, Nickeil Alexander-Walker, who has started in Ball’s place for the last six games, scored 31 points against Orlando. However, in the final minute of overtime, he missed a potential tying free throw and a layup that could have cut the deficit to one point.

He returned to the court from the locker room after the game to work on his shooting.

James Johnson started in his Pelicans debut after being acquired in a trade with the Dallas Mavericks last week, and he scored a season-high 17 points. Josh Hart had 14 points and a career-high 17 rebounds, Eric Bledsoe scored 14 and Jaxson Hayes had 10.

The Pelicans committed 24 turnovers, which coach Stan Van Gundy called “ridiculous,” and got outscored 36-17 on points off turnovers.

“It’s amazing the game was even close,” Van Gundy said.