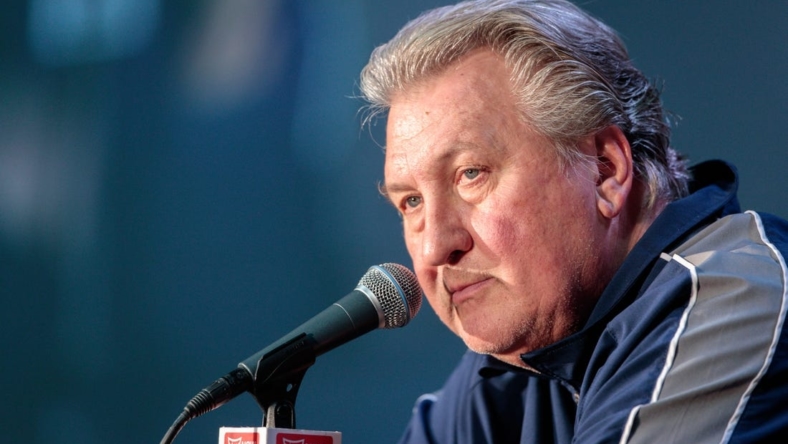 West Virginia will feature a new-look lineup on Monday when it opens the season against visiting Mount St. Mary’s in Morgantown, W. Va.

WVU lost its top four scorers and 10 players overall from last year’s club that finished with a 16-17 record and a 4-14 mark in Big 12 play.

Stevenson, who averaged 11.6 points last season with the Gamecocks, showed a glimpse of what he has in store on Friday. He scored a game-high 18 points to lead West Virginia to a 73-57 victory over Bowling Green in a charity exhibition. Emmitt Matthews Jr. scored 14 points against the Falcons in his return to Morgantown following a one-year stint at Washington.

“I like what’s happened with the guys in the portal; I like their attitude,” Huggins said. “Their work ethic has been really good, and it wasn’t so much a year ago. I think we’ve gained by subtraction in some regards.”

Mount St. Mary’s turned the page with all of its sports earlier this year by joining the Metro Atlantic Athletic Conference. The Mount was picked to finish 10th in the preseason coaches’ poll after concluding 2021-22 with a 14-16 record and 9-9 mark in the Northeast Conference.

Jalen Benjamin was selected third-team preseason All-MAAC for the upcoming season. He averaged team-leading totals in points (13.3) and assists (4.0) in his first campaign with Mount St. Mary’s after spending two seasons with UAB.

“I decided to transfer because I just felt like I needed a fresh start,” Benjamin told PressBox Online. “Coming to the Mount, through my recruiting process (head coach Dan Engelstad) was the one that was always calling me. That was something I really wanted when transferring, going to a place that wanted me for who I was and allowed me to be who I am as a player.”

Malik Jefferson averaged a team-leading 6.6 rebounds per game last season to go along with 7.1 points for Mount St. Mary’s.