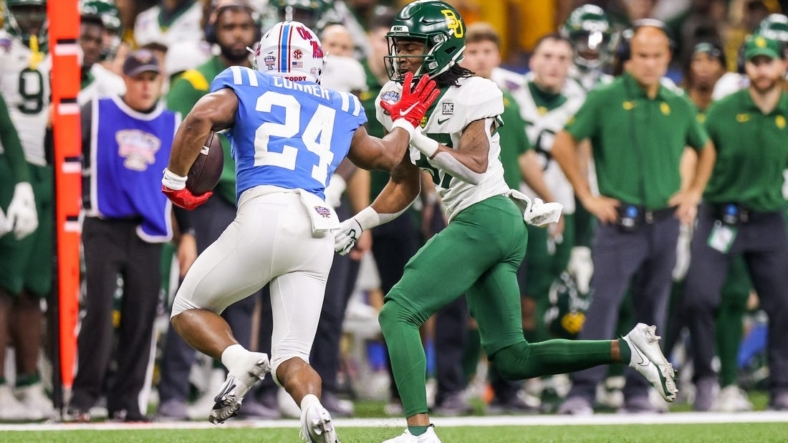 No. 10 Baylor will look to handle a lower-level opponent and set the table for a repeat run to the Big 12 Conference title when it hosts Albany, an FCS team, on Saturday evening in the season opener for both teams at Waco, Texas.

The Bears won 12 games for the first time in program history in 2021, a season after they went 2-7. Baylor beat Oklahoma State in the conference championship game last December, then defeated seventh-ranked Ole Miss in the Sugar Bowl to finish 12-2.

After being picked to finish eighth in the Big 12 in last year’s preseason coaches’ poll, Baylor is the league favorite heading into this season.

“Last year, we took everybody by surprise, but this year it’s no surprise,” Baylor senior cornerback Mark Milton said. “It’s kind of like every game is going to be (our opponents’) Super Bowl, so we’ve got to be on our Ps and Qs every single week knowing that. We’re going to do the same thing — pound the rock every day.”

Baylor will have to replace the majority of its offensive firepower from last year, but the Bears have serious depth throughout the roster.

Baylor’s returning players, including four starters on the offensive line, have taken charge, leaving coach Dave Aranda impressed by how the veterans have shown the team’s newcomers the standards expected from the team.

“We’ve been way focused and positive,” Aranda said. “And it gets better when we hit the field and we see the effort and the competitiveness of when we’re striving and pushing each other to be better.”

“The issues for us are really strong leadership that left from last year and growing some leaders. All the way back to what leadership is, there’s been a lot of work with that, and it’s ongoing.”

Sophomore quarterback Blake Shapen won the starting job over senior Gerry Bohanon in the spring and has been impressive as his leadership and passing skills have evolved throughout the summer and preseason camp.

Albany, which was added to Baylor’s schedule when a home-and-away series with Louisiana Tech was canceled, will be little but fodder for the Bears to tinker with in their opener. Things will get much tougher in Week 2 when Baylor travels to play No. 25 BYU.

The Great Danes, who play in the Colonial Athletic Association as an FCS Division I school, went 2-9 last season in their eighth year under coach Greg Gattuso. Albany reached the second round of the FCS playoffs in 2019.

Albany was picked to finish 12th in the 13-team CAA in the preseason media poll. The Great Danes are led by linebacker Jackson Ambush, their leading tackler from last year, punter Tyler Pastula and defensive lineman Anthony Lang, each of whom was named to the All-CAA preseason team.

Sophomore Reese Poffenbarger, a transfer from Old Dominion, will get his first college start for Albany after winning a three-player quarterback battle in the offseason.

“I don’t know what to expect or how we’re going to play or where we’ll be at halftime or anything like that,” Gattuso said. “But the goal is to make sure we get everybody some snaps in the game, for sure.”