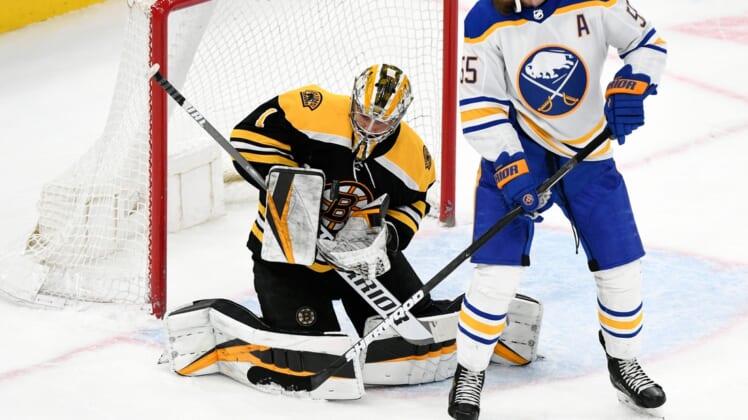 Charlie Coyle and Jake DeBrusk scored in a shootout to push the new-look Boston Bruins past the visiting Buffalo Sabres 3-2 Tuesday night.

Craig Smith had a goal and an assist, and David Krejci also scored as the Bruins snapped a two-game skid. Jeremy Swayman had 21 saves and turned away both Buffalo chances in the shootout.

Rasmus Dahlin and Colin Miller scored for the Sabres, who have dropped three of four (1-2-1). Dustin Tokarski stopped 29 shots in relief of Linus Ullmark, who exited early in the first period with an undisclosed injury.

Coyle went five-hole on his Round 1 marker, and DeBrusk followed top shelf to complete the shootout, which was necessitated after Dahlin, celebrating his 21st birthday, tied the game at 2 on a one-timer through traffic with 8:07 remaining in the third period.

Boston’s Taylor Hall and Buffalo’s Anders Bjork, traded for each other as part of a deal Monday, each had strong chances to score in overtime. The Sabres’ Dylan Cozens put the puck in net, but it was ruled to be above the crossbar and immediately waved off.

Hall didn’t crack the scoresheet, but he did help set up Smith’s go-ahead goal at 5:29 of the second period. On an offensive rush, Hall dropped the puck off in the circle for Smith, whose wrister made it through for an unassisted marker and a 2-1 advantage.

Also debuting for Boston was forward Curtis Lazar, acquired with Hall, and defenseman Mike Reilly, who was added from the Ottawa Senators in a deal Sunday.

The Sabres scored first on a one-timer from the blue line by Miller at 1:52 of the first period. Bjork and Cozens assisted on the tally.

Three minutes later, Ullmark exited the contest after making only three saves. The Bruins equalized against Tokarski when Krejci scored off a rebound of a Jeremy Lauzon one-timer at 13:20.

Krejci’s goal came while Sabres center Riley Sheahan was banged up following a hit from Nick Ritchie. Sheahan would return in the second period. Ritchie, who was later penalized in the first for boarding Dahlin, dropped the gloves with Matthew Irwin during the middle frame.