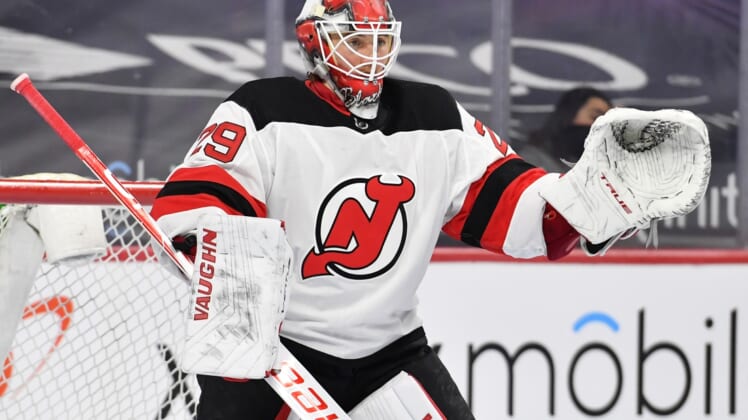 New Jersey Devils goaltender Mackenzie Blackwood admitted he has yet to receive a COVID-19 vaccination, a decision that potentially could keep him from participating in some games this season.

“I’ve not decided one way or the other whether I’m doing it. I’m taking a little bit of extra time,” Blackwood said. “I have a couple of health concerns and health reasons why I’m working through it a little slower. I wanted to check off a couple of boxes, and not rush to do it.”

NHL teams are allowed to suspend unvaccinated players if they can’t participate in club activities, such as playing a game, due to contracting COVID-19. The league is not allowing unvaccinated players to compete in games in Canada. The Devils do not play north of the border until Dec. 3 against the Winnipeg Jets.

The NHL estimates approximately 98 percent of its players will have been vaccinated before the season begins Oct. 12.

Blackwood, 24, said he is weighing a number of factors in his decision.

“First and foremost is health. Second of all, the social impact it has on my teammates and myself. I care about every single person in that dressing room and I would never want to put them in a situation where I make their job on the ice harder or put them in a position to lose,” Blackwood said. “The financial loss isn’t something that I’ve thought about, because it’s not as important to me.”

Blackwood sported a 14-17-4 record with one shutout, a 3.04 goals-against average and .902 save percentage in 35 games last season. He signed a three-year, $8.4 million contract in December.

The Devils selected Blackwood in the second round of the 2015 NHL Draft. He has played 105 games with New Jersey, posting a 46-41-12 record with a 2.83 goals-against average, a .911 save percentage and six shutouts.