The New England Patriots entered the summer counting on Cam Newton being their starting quarterback this season, allowing rookie Mac Jones to learn the system before taking the field. With the regular season about to begin, Bill Belichick faces a much tougher decision than he expected.

Belichick, who is fond of Newton, gave the starting nod to his veteran quarterback in every preseason game. But ever since Jones arrived in New England, whether it’s in practice or games, the No. 15 pick has continued to make a strong impression.

With the Patriots’ preseason concluded, Belichick refused to name a starting quarterback on Monday. With the opener scheduled for Sept. 12, the future Hall of Fame coach might take his decision down to the wire. Based on the latest update from ESPN’s Dan Graziano, it seems this quarterback battle is coming down to the wire.

“It is a tough decision from what I understand. Mac Jones has done everything right to make it as difficult as possible on Bill Belichick to make this decision. Cam Newton, my understand is, hasn’t done much wrong, he just hasn’t done anything to widen the gap between him and the rookie. It’s entirely possible, from my understanding, that he does pick Mac Jones to start Week 1. If he doesn’t, I don’t think anyone is expecting it to be long before they make the switch.”

Jones has kept closing the gap in the competition. As of early last week, many covering the team expected Newton to be named the Patriots’ starting quarterback. But everything seemed to change thanks to a violation of the COVID-19 protocols. 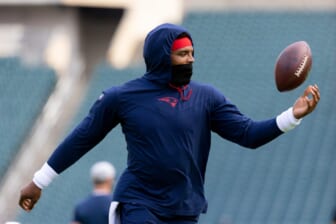 Newton, who isn’t vaccinated, left the New England area for a medical appointment. While he conducted his own private tests for the coronavirus, he fell out of the NFL’s daily testing protocol. As a result of the violation, he had to miss practice for several days before being allowed to return to the facility.

Jones took advantage of his opportunity. Getting a majority of the reps with the first-team offense, the rookie put on a passing clinic and made a stronger case to be named the starter. While he came off the bench behind Newton in the preseason finale, Jones finished with 156 passing yards, one touchdown and a 131.8 passer rating against the New York Giants.

Newton has performed well this summer, showing more arm strength and better accuracy than he had during the 2020 season. He also adds a rushing element at quarterback that New England wouldn’t have with Jones. But the former NFL MVP’s decision to be unvaccinated might result in him losing the starting job.

Even if Newton starts in Week 1 against the Miami Dolphins, it’s evident the Patriots won’t be afraid to make a quarterback switch early.