Why the New England Patriots should look to acquire J.J. Watt in 2021

The New England Patriots go into the offseason looking to be aggressive, while J.J. Watt may leave Houston. Here's why the Patriots should look to acquire Watt. 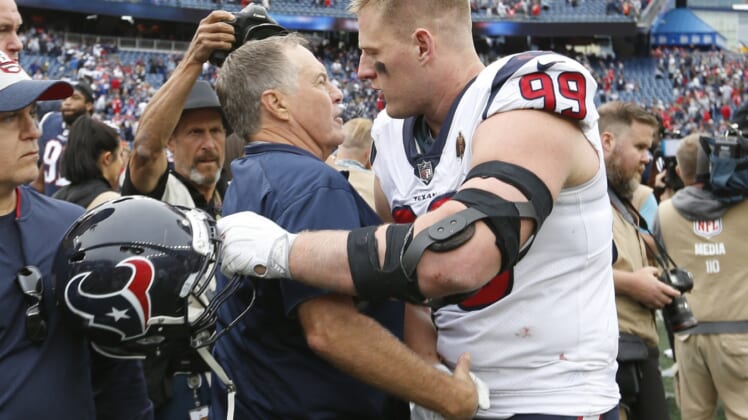 The New England Patriots go into this offseason looking to be aggressive in their pursuit of returning to the playoffs. There are many holes to fill, with a majority of them coming in on the offense. However, there are defensive holes such as defensive tackles, defensive edges, and linebackers.

The Athletic’s Jeff Howe created a list of 25 players this offseason that would best fit the New England Patriots. Howe had Hunter Henry at number one due to the Patriots’ need to acquire offensive weapons. However, he has J.J. Watt coming in at number two on the list.

People may have never thought that Watt could be an option for the Patriots, but that’s where they could find themselves with a great amount of cap space. There are many pros and not a ton of cons in the decision to possibly bring Watt to Foxborough.

J.J. Watt isn’t quite player he used to be, but there is no one better than Bill Belichick in the NFL who can maximize the talent available to him. The New England Patriots went 7-9 last season with a roster that many others would barely get three to four wins.

Watt has been plagued with injuries throughout his career, but he did play the whole season last year and started every game. Watt had 52 tackles, five sacks, and one interception, which resulted in a 19-yard touchdown.

The former Defensive Player of the Year has played 16 games in three of the last six seasons. Nevertheless, when Watt is in the lineup, he’s still dominant, evident in his Pro Football Focus ranking of seventh among all edge defenders in 2020.

New England doesn’t have that household name that offenses will look to contain on a weekly basis. The best defensive lineman the Patriots have had in the last couple of years is current Detroit Lions defensive end, Trey Flowers. Belichick maximized his abilities on defense and got him a huge payday with the Lions.

It makes sense for both Watt and New England, as former Patriots assistant Romeo Crennel was the Houston Texans’ interim coach in 2020, so there’s some schematic continuity there if Watt takes his talents to the northeast. The 31-year-old defensive end has not been done any favors in Houston, who will most likely be among the NFL’s worst teams next season amid the Deshaun Watson trade demand fiasco.

Watt absolutely loves the game of football and will do whatever it takes to win. If you give him to the most brilliant-minded and accomplished head coach in the NFL, it would be a match made in heaven and solve many of the issues that the New England Patriots currently face.

Acquiring J.J. Watt could bring others to the New England Patriots

Acquiring J.J. Watt would signal to other players that you are willing to win now. If Watt also buys into the move, it gives players a reason to go and play for your team, because one of the most decorated defensive players of this generation wants to go there.

This is exactly why the New England Patriots would greatly benefit from acquiring Watt from the Houston Texans. Not only do you have a player who has been one of the best defensive players when healthy, but you bring a great personality into the locker room, who is respected league-wide.

The first question is how the Patriots would go about acquiring him, whether it be a trade or a signing. Watt has a $17.5 million cap hit next season, and it’s possible Houston could cut him to save all that room as it navigates a roster rebuild. It could be hard for the Texans to trade Watt with that cap hit, which is unfortunate for them, because it gives them little leverage. That means the Pats could get Watt at a bargain.

Helping the case overall for the Patriots and Texans to work out a Watt trade is the fact that longtime New England personnel man Nick Caserio is now the new general manager in Houston. That connection can’t be understated.

Even though he has been injury-plagued, it may be worth it to try to see if there’s a way to land Watt for cheap and then restructure his contract should he get released. If New England can offer him $10 million annually for two years, it may be worth it.

Of course, Watt would probably have to be sold on the Patriots’ quarterback situation before signing on the dotted line, or agreeing to a trade. Joining the team would come with the understanding Belichick and Co. are ready to win now, which isn’t apparent at least given the current state of the most important position vacated by Tom Brady.

Howe even mentioned how Watt could recruit younger NFL players to the Patriots if he shines within the team. If New England can put Watt in position to thrive, it’ll give others a sense of the culture the Patriots have, even if they are looking in from the outside. That whole “Patriot Way” paradigm is being cast in at least a slightly more negative light after Brady just led the Tampa Bay Buccaneers to a Super Bowl with a decidedly looser coach in Bruce Arians.

There are some cons to bring Watt to the organization, such as his injury history and potential contract demands, whether he retains his 2021 cap hit or negotiates a new deal. However, the New England Patriots have the cap space to take him on, and you can bet Bill Belichick wants to win after seeing Brady hoist the Lombardi Trophy without him. Those two things go hand-and-hand, which is dangerous for the NFL.