New England Patriots cornerback J.C. Jackson said his desire to improve his game has not changed since Stephon Gilmore was traded to the Carolina Panthers on Wednesday.

“I still have the same mentality every day, and that’s to compete and get better,” Jackson said on Thursday.

Jackson admitted he was “shocked” by the Gilmore trade, noting that the All-Pro had served as a mentor to him since he joined the Patriots as an undrafted free agent out of Maryland in 2018. 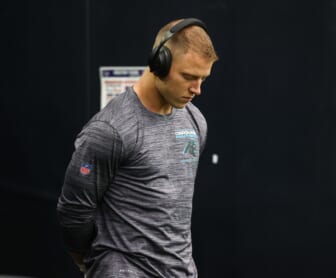 Jackson referenced Gilmore’s demeanor and the way that he prepared to compete in each game.

Jackson, 25, has recorded 17 tackles and two interceptions in four games this season for New England (1-3), which visits the Houston Texans (0-4) on Sunday.

Jackson has 117 tackles and 19 interceptions in 49 career games with the Patriots.

Gilmore, 31, was the 2019 NFL Defensive Player of the Year and a four-time Pro Bowl selection. He was in the final season of a five-year, $65 million deal signed with the Patriots in 2017. He had made it clear to the Patriots that he wanted to be among the highest-paid cornerbacks in the NFL, but the two sides were unable to agree on a restructured deal.