N’Keal Harry, the New England Patriots’ 2019 first pick, could be shipped off in the weeks before April’s NFL draft.

On Thursday, Pro Football Focus reporter Dough Kyed tweeted that the wide receiver’s three-year run with Bill Belichick and the Patriots could be ending very soon.

“Patriots WR N’Keal Harry is a name to keep an eye on as a potential trade candidate before the draft, per source,” Kyed wrote. “Teams have shown recent interest in the 2019 first-round pick.”

Over his first three seasons in the NFL, the former Arizona State star wideout has racked up 57 receptions, 598 yards, and four touchdowns in 33 games. However, in 2021 he played in 12 games but had only 12 catches, 184 yards receiving, and no TDs. He finished with the ninth most catches on the roster last year.

While the 24-year-old seemingly regressed in year three, he is a respected talent on the team for his abilities in run blocking. The Patriots finished eighth in the league in rushing last season.

There are certainly several teams that would be willing to take a chance on Harry and the upside he still possesses’ at 6-foot-4 and 225 pounds. Last season, the Cleveland Browns and New Orleans Saints didn’t have a player surpassing over 700 yards receiving. Harry could be an interesting edition in a featured role for a couple of teams in need of a breakout WR talent. 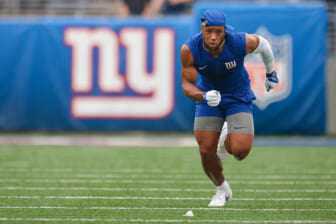 The Philadelphia Eagles have a rising star WR option in DeVonta Smith. The rookie first-round pick just missed having a 1,000-yard season in his first year in the league. Pairing him up with Harry, his polar opposite in size could turn into a dynamic combo to toss the ball to for developing quarterback Jalen Hurts in 2022.