Running back Sony Michel is on his way to the Los Angeles Rams in a trade from the New England Patriots for a pair of draft picks.

The former first-round pick is in the final year of his rookie contract and is owed $1.79 million in salary for 2021.

Michel played in only nine games with 79 total carries last season. He was part of a deep and youthful lot of backs with the Patriots entering the 2021 season.

The Rams announced the deal was complete on Wednesday morning as all 32 NFL teams are against the clock with six days remaining to set their final 53-man rosters from the current 80-man limit. 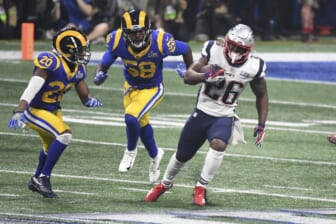 Per multiple reports, the 2022 late-round draft picks are fifth- and sixth-round selections that could become a fourth-rounder based on compensation picks.

Michel, 26, would immediately be in line to compete for a starting spot in the Rams’ woebegone backfield where Darrell Henderson is the presumed primary ballcarrier. Second-year back Cam Akers was the starter entering training camp, but he’s done for the season with a torn Achilles.

The three other running backs behind Henderson on the current roster have not recorded an NFL carry.

Michel rushed for 900-plus yards each of his first two seasons in the NFL.