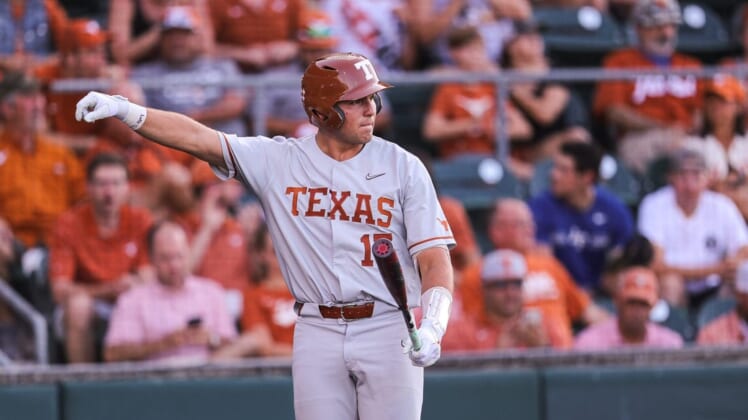 Not only are the Texas Longhorns the new co-favorite to win the College World Series, the betting public believes in them as well.

Of the eight schools to advance to the College World Series, Texas is the most popular bet to win the title at BetMGM, receiving 24.7 percent of the handle and 22.2 percent of the total tickets.

The Longhorns opened at +750 but moved to +400, making them the co-betting favorite with Stanford as of Tuesday evening. They were the second biggest liability overall behind Texas A&M.

The Longhorns went 42-19 in the regular season and finished as the No. 9 seed in the nation. They defeated East Carolina in three games to advance from the super regional to the final stage of the tournament, held annually in Omaha, Neb.

Texas will face Notre Dame on Friday in the first round of the double-elimination bracket. The Fighting Irish notably eliminated top overall seed Tennessee in the super regional.

Before the Volunteers were knocked out, they were far and away the biggest liability at BetMGM, the sportsbook said last Thursday. They had attracted 51.5 percent of the tickets and 72.2 percent of the handle at that time.

Far fewer bets have come in for Stanford, despite the Cardinal entering the postseason as the No. 2 seed. They punched their ticket to Omaha on Monday by beating UConn in the rubber match of their three-game series.

In fact, BetMGM said Arkansas is the second-most popular bet, with 20.4 percent of the tickets and 18.3 percent of the handle. The Razorbacks will face Stanford in the first round in Omaha on Saturday.