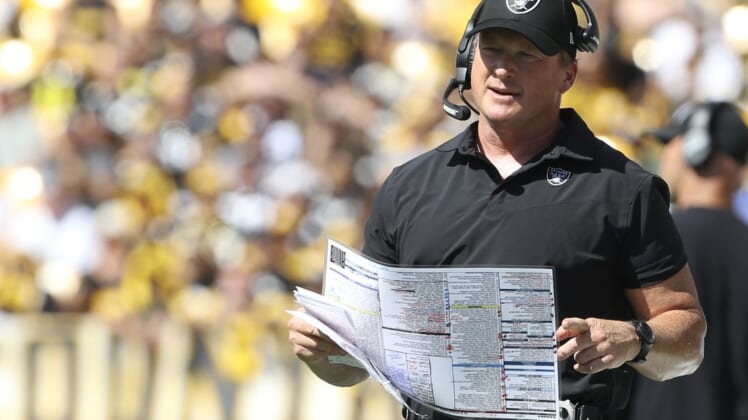 District Court Judge Nancy Allf also denied a Motion to Compel the case into binding arbitration under the terms of Gruden’s NFL contract. Attorneys for the NFL and Goodell presented their positions separately on each motion, clearing the case to proceed via trial.

Gruden was present in court but did not take questions, offering a brief comment while exiting the courtroom: “We are going to let the process take care of itself. Good luck to the Raiders. Go Raiders.”

Barring other issues or a settlement between parties, moving forward with the case opens the possibility of the legal discovery phase and bring public parts, or all of the investigation, into the Washington NFL franchise.

Gruden resigned as head coach of the Raiders in October following backlash from racially-charged and insensitive email messages. Gruden claims the messages that were all dated to previous years were leaked by the NFL as part of an “orchestrated” and “malicious” campaign.

Gruden filed his lawsuit in the district court of Nevada’s Clark County in November.

The two-time Raiders coach had six seasons remaining on a 10-year contract worth $100 million.

Messages published by the Wall Street Journal and other outlets were captured by the NFL as part of an investigation into the culture of the Commanders — then known as the Washington Football Team. Many of the messages reported to be from Gruden were sent to team president Bruce Allen, who also had roots with the Raiders and worked with Gruden in Oakland.

Following Gruden’s resignation, Raiders owner Mark Davis called for the NFL to release all details related to the WFT investigation. Commissioner Roger Goodell said the NFL had no plans to make the breadth of the findings or additional email messages public.

The New York Times published details of a series of messages from Gruden with misogynistic and anti-gay language.

The NFL’s position in the Nevada filing points to Gruden not denying the legitimacy of the messages or claiming that they were somehow altered or edited.

“Gruden does not, and cannot, dispute that he wrote the published emails. He does not, and cannot, dispute that he sent those emails to multiple parties,” the NFL filing states. “Nor does he claim that they were somehow altered or edited and that the repugnant views espoused in them were not in fact expressed by him. Instead, Gruden filed the instant complaint against the NFL and the commissioner, painting himself as the victim in a fictional story and seeking money through baseless claims against the NFL.”