Nets vs Celtics is one of the most intriguing matchups heading into the opening round of the 2022 NBA playoffs. It features several of the best scorers in the league and two very differently built rosters.

The seventh-seeded Brooklyn Nets seem primed for an upset over the second-best team in the Eastern Conference. However, there are many moving parts to this star-studded re-imagining of the classic New York versus Boston sports rivalry, and there are several major questions heading into tip-off of game one on Sunday.

Let’s take a look at the three biggest storylines heading into the opening-round series between these east coast rivals.

Related: Find out which playoff matchups are next on our NBA games today listing

What can Ben Simmons offer?

While Ben Simmons is rumored to make his long-awaited return in the team’s series against the Celtics, no one really knows what he will be able to contribute. He certainly isn’t a fresh fish learning the ropes with new teammates and a foreign system. The Aussie has been with Brooklyn since his February trade and probably has a good idea of how coach Steve Nash wants his team to play. 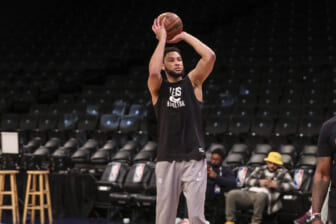 However, with a back injury that has kept him out throughout his short tenure, you can only build up so much chemistry on the practice floor. Especially, late in the season when certain players are deep in maintenance mode and trying to make it to the playoffs as healthy as possible. With that said, if Simmons is willing to take an offensive back seat, and humbly play the role of perimeter defender and facilitator, there is much he can offer his team.

No doubt there will be growing pains trying to mesh with superstar ball magnets like Kevin Durant and Kyrie Irving, but if Simmons is willing to play to his greatest strengths he could be a dynamic addition that the Celtics were not ready for. Especially, coming off of the bench.

Will Boston Celtics’ defense be the series X-factor?

For decades in all team sports, the saying was that defense wins championships. But in today’s NBA that isn’t so much the case anymore. Especially when rugged defenders are handcuffed by the offense-friendly rule set and you have seven-footers that can hit shots from anywhere on the court. However, you can’t underestimate Boston’s top-ranked defense and what it means in a seven-game series. 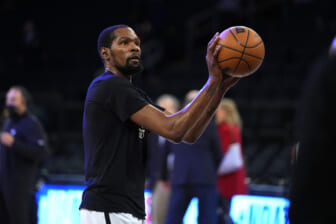 Good defense is so valuable because it makes up for limitations in scoring. The C’s are clearly outgunned offensively, but the same very much could be said when it comes to the defense of the veteran-filled Nets. Boston’s defense is a serious force when Robert Williams is playing. However, with Williams out due to a torn meniscus, the C’s D won’t be nearly as potent. Making life easier for Brooklyn’s talented scorers. That is bad news for Beantown.

Who has more pressure to win, Kevin Durant or Jayson Tatum?

Jayson Tatum and Kevin Durant are the faces of this series. Both carry the bulk of the offensive load for their teams and bare the responsibility of either team losing this series. As the bigger star and older talent, the assumption would be that greater expectations and pressure rest on Durant’s shoulders. However, that may not be the case.

Of course, more is expected of this Nets squad, but with the James Harden drama, Irving’s vaccination refusal, and numerous injuries, the team is no longer a favorite in the conference in 2022. However, the Celtics rose to the top of the division, and sooner or later Tatum will have to deliver more on his potential in his fifth year as the franchise’s brightest star.

The Celtics are expected to win this series, and Tatum has a chance to prove he is one of the elite talents in this game by doing so. The team’s late-season success and the mess that Brooklyn has been in 2021-2022 puts the onus on Tatum to knock Durant and the boys out of the playoffs early.