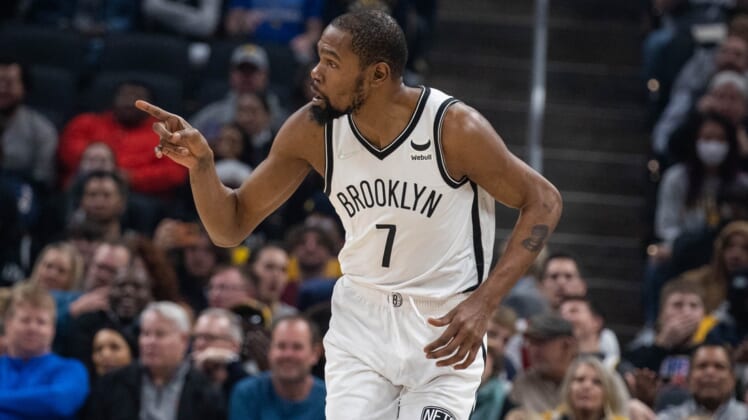 Suddenly, home games are becoming difficult for the Brooklyn Nets.

Winless at home since Dec. 16, the Nets will attempt to halt a five-game home skid Sunday afternoon when they face the San Antonio Spurs.

Brooklyn earned its Dec. 16 home victory when Kevin Durant scored 34 points in a 114-105 victory over the Philadelphia 76ers. The losing streak started with a seven-point loss to the Orlando Magic on Dec. 18, which was followed by collapses down the stretch in losses to the 76ers and Los Angeles Clippers before the Nets lost by double digits to the Memphis Grizzlies and Milwaukee Bucks.

“Since we’ve gotten everyone back more or less, we just haven’t had the confidence, the spirit, the joy, and you could see it,” Brooklyn coach Steve Nash said. “Too many lapses and not enough pace and enthusiasm, and we’ve got to find that. We’ve got to get that back after this interruption and be a group that goes out there and is difficult to play against.”

The Nets, who hold a 10-10 home record that is the worst among top-four teams in either conference, will face a quicker turnaround than usual for Sunday. They originally were slated to host San Antonio at night but are playing a noon game to give them more time to fly for a makeup game against the Portland Trail Blazers on Monday night.

Durant scored 29 points Friday, but the Nets continued their recent trend of shaky starts at home. They were outscored by eight in the opening quarter and during the home skid, the Nets have been outscored by 29 points in the first quarter.

“I think we all love being at home,” Durant said. “It’s just the fact that we’re struggling, having bad starts, teams coming in here with major confidence. We’ve got to turn the tide, and I feel like we will. Our home crowd wants to get behind a team that’s playing well. I don’t expect us to have a great home-court advantage if we’re playing (bad) basketball.”

San Antonio is 1-5 over its past six games and 1-4 on a seven-game trip that will end with Monday’s visit to the New York Knicks. After a 99-97 win over the Boston Celtics on Wednesday, the Spurs never led Friday in a 119-100 loss to the Philadelphia 76ers, who scored 39 points in the opening quarter.

“The first quarter we didn’t compete,” Spurs coach Gregg Popovich said. “Got down 20, and then after that we played much better and it was pretty even.”

The Spurs also took the loss to Philadelphia as Devin Vassell, Keldon Johnson, Tre Jones and Derrick White were in the COVID-19 protocol after combining for 49 points Wednesday and likely will be out Sunday.

The Spurs also were without Doug McDermott and Thaddeus Young, both of whom are in the COVID protocol, and the absences resulted in Bryn Forbes and rookie Josh Primo making their first starts of the season.

Dejounte Murray, who scored 27 points Friday, has 49 points, 21 assists and 14 rebounds in two games back from the protocol while shooting 47.7 percent (21-of-44) from the field.