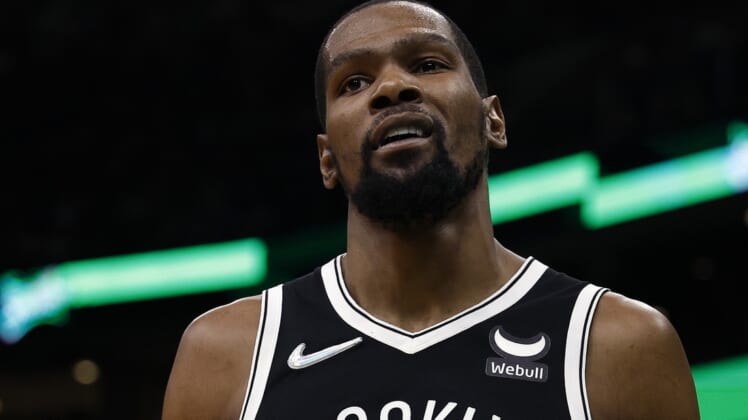 Before encountering this version of the Boston Celtics’ defense, a healthy Kevin Durant never averaged less than 24.5 points in any postseason series.

The ability to effectively defend Durant and limit the superstar’s impact are among the reasons the Celtics hold a 3-0 lead in their Eastern Conference first-round series. Boston can complete the sweep of the best-of-seven set on Monday night when they visit the Brooklyn Nets.

The Nets opened as 2.5-point favorites to win Game 4 at BetMGM but the line had moved to 1.5 by Monday. The spread-line action had been nearly split with Brooklyn backed by 52 percent of the bets and 51 percent of the handle.

The line was a mere 1.0 point at DraftKings, where the Nets were being backed by 55 and 54 percent, respectively.

The Celtics, who possessed the NBA’s top-ranked defense during the regular season, won each game in different ways. If they cannot close out the series Monday, Game 5 is Wednesday in Boston.

Boston received a buzzer-beating shot from Jayson Tatum in the series opener and overcame a 17-point deficit in Game 2. In Game 3 on Saturday, the Celtics seized the lead for good late in the first quarter and moved to the verge of the sweep with a 109-103 victory.

While each of those games were won differently, a theme is Boston’s ability to contain Durant. He is averaging 22.0 points on 36.5 percent shooting against Boston.

“Clearly they’re loading up on him, sending bodies to him, being physical with him,” Nets coach Steve Nash said.

On Saturday, Durant’s impact was so minimal that he scored 16 points and took 11 shots — his fewest attempts in a playoff game since taking 10 in Game 2 of the 2017 Western Conference finals against San Antonio. That followed up an 0-for-10 effort in the second half in Game 2.

“I was just thinking too much to be honest, this whole series,” Durant said. “Like how I approach the game. We got another game to play, another opportunity, and I’m looking forward to that.”

While Durant’s struggles are a key factor, so is the performance of Tatum. Tatum scored 39 points Saturday and is averaging 29.7 points in the series.

“I’m not trying to make it a one-on-one thing or a matchup thing. For me, trying to go out there and play as hard as I possibly can, give it everything I got on both ends, and do whatever I can to ensure that we get a win on any given night,” Tatum said. “And everybody on our team is doing that, sacrificing, competing, being on the same page.”

Tatum also is getting plenty of help as Jaylen Brown is averaging 22.7 on 50.9 percent from the field. Brown had 23 points and Marcus Smart added 14 on Saturday for the Celtics, who shot 50 percent from the floor.

The Nets are getting productive showings from Bruce Brown, who scored 26 points Saturday and is averaging 18.0 in the series. Brown’s showing is occurring as Kyrie Irving was limited to 26 points in the past two games after getting 39 in the series opener.

Brooklyn will not be able to unveil Ben Simmons in Game 4, as it had originally hoped.

Simmons was the centerpiece of the James Harden trade to Philadelphia at the deadline but has yet to appear for the Nets due to a back injury. Game 4 was widely expected to mark his debut, but the Nets ruled him out Sunday afternoon after he reportedly experienced back soreness following a recent practice.

The game does have the highest Over/Under of the three NBA contests Monday night.