Nets press on amid controversies, open road trip vs. Wizards 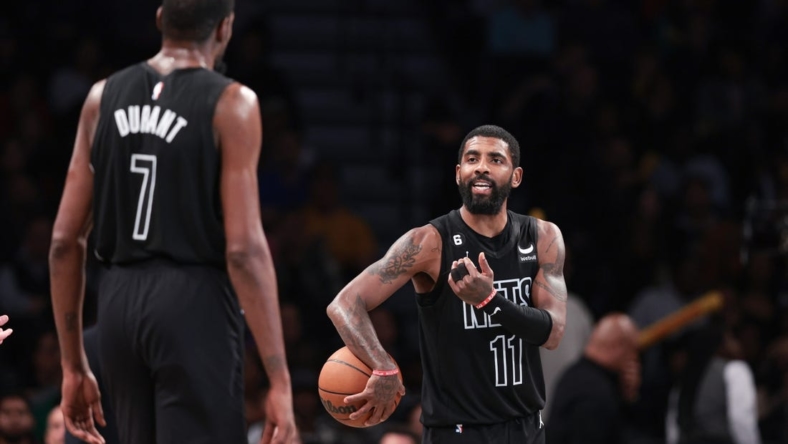 The Brooklyn Nets will try to leave their off-the-court drama in their rearview mirror on Friday when they open a three-game road trip against the Washington Wizards.

The Nets have been idle since dropping their fifth outing in six games with a 108-99 setback to the Chicago Bulls on Tuesday. That came on the heels of the team parting ways with former coach Steve Nash, and reports circulating that the team has engaged in a process to name Ime Udoka, suspended by the Boston Celtics, as a potential replacement.

And of course, there’s the Kyrie Irving situation. Irving caused a public firestorm with a controversial social media post about a book and movie that featured antisemitic tropes.

Nets owner Joe Tsai has condemned Irving’s words, and the latter later acknowledged the “negative impact of my post” in a joint statement with the Nets and the Anti-Defamation League. Irving will join the Nets in donating $500,000.

However, he did not apologize in the statement.

Irving has continued to play in games — albeit, not well on Tuesday — and faced no disciplinary measures from the Nets or the NBA. He finished with four points after misfiring on 10 of 12 attempts from the floor — and all six tries from 3-point range — in the loss to the Bulls.

Brooklyn is surrendering a generous 118.8 points per game and allowing the opposition to make 41.2 percent of its 3-point attempts.

“The message I told the guys after (was) no excuses,” interim coach Jacque Vaughn said. “Whether it’s back-to-backs, no excuses. Whether the change in scenery today, no excuses. This is what we do for a living. We signed up for it.”

Kevin Durant collected 32 points and nine rebounds on Tuesday. The 12-time All-Star and former league MVP has made 22 of 38 shots over his last two games.

“Let’s be real, we’re pros, we’re veterans. We had a tough start,” Durant said when asked about the team’s struggles and the latest coaching move. “It was a rocky year last year, rocky summer. We knew that everybody was being evaluated.”

Kristaps Porzingis followed up his 32-point, nine-rebound performance in Washington’s 118-111 loss to Philadelphia on Monday with 30 and nine, respectively, in the Wizards’ 121-111 victory over the 76ers on Wednesday. Porzingis also had three assists, three blocks and one steal in the more recent game.

“If a big is gonna switch out on me, I can go by the big, I can get whatever shot I want. And if a small is gonna be on him, he can literally stand over you and shoot the ball, so like Doc (Rivers, 76ers coach) said, man, we’re gonna be a duo to reckon with.”