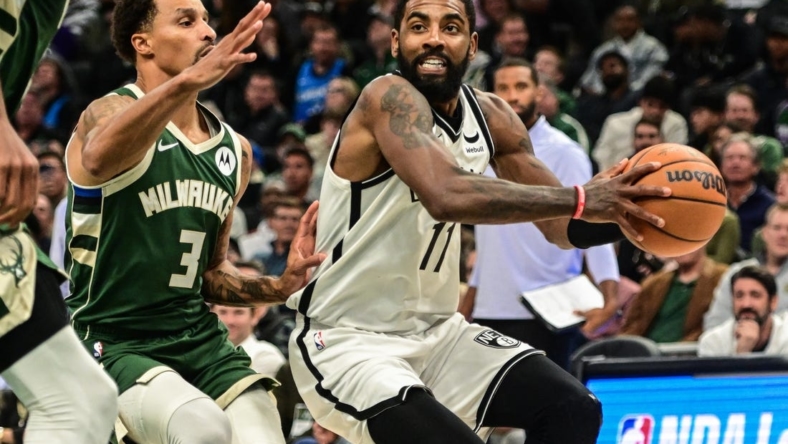 When the Dallas Mavericks visited the Brooklyn Nets on March 16, they constantly frustrated Kevin Durant with double teams and then escaped with a two-point win on a game-winning 3-pointer by Spencer Dinwiddie against his former team.

The Nets are off to a frustrating start after an eventful summer, and the Mavericks will attempt to make things difficult for them again when the teams get together Thursday night in New York.

In the previous meeting, Dallas held Durant to 23 points and forced him to miss 12 of 20 shots. The Mavericks emerged with a 113-111 win when Dinwiddie hit the game-winning 3-pointer in front of Brooklyn’s bench.

“We weren’t going to try to let (Durant) play at all tonight,” Mavericks coach Jason Kidd said following that contest.

While Dallas was able to beat a team with Durant, it did not face Kyrie Irving, who was ineligible to play home games due to New York’s vaccine mandate that was lifted a few weeks later.

This time, Irving will be in the lineup and along with the rest of the Nets is hoping to rebound from a pair of ugly second half showings in Memphis and Milwaukee.

In Brooklyn’s 134-124 loss to the Grizzlies on Monday, the Nets conceded 45 points in the third quarter and were outscored 70-55 in the second half to negate a pair of 37-point performances by Durant and Irving.

On Wednesday, Durant and Irving combined for 60 points, but the Nets were outscored 67-44 in the second half and squandered a 12-point lead in a 110-99 loss to the Bucks.

The Nets were whistled for five technical fouls in Milwaukee, including two that led to coach Steve Nash’s ejection in the third quarter.

“We had a great control of this game going into halftime,” Irving said following the Bucks game. “Then the third and fourth quarter, they got a lot of 50-50 basketballs, and then a few calls went the other way.”

Dallas can relate to some of Brooklyn’s defensive struggles, especially after falling 113-111 to the host New Orleans Pelicans, who were without Zion Williamson and Brandon Ingram on Tuesday.

The Mavericks followed up a 41-point win at Memphis by allowing 40 points in the opening quarter at New Orleans. The short-handed Pelicans shot 57.9 percent from the floor, and Dallas took the loss when Luca Doncic missed a 3-point attempt at the buzzer.

“This is our first game with true defensive breakdowns,” Dinwiddie said. “It’s three games in. There’s no reason to panic. Just learn and grow.”

Doncic had another standout showing in the loss, putting up 37 points, 11 rebounds and seven assists.

The Mavericks are 5-2 in the past seven meetings with the Nets. The past three were decided by four points or fewer.