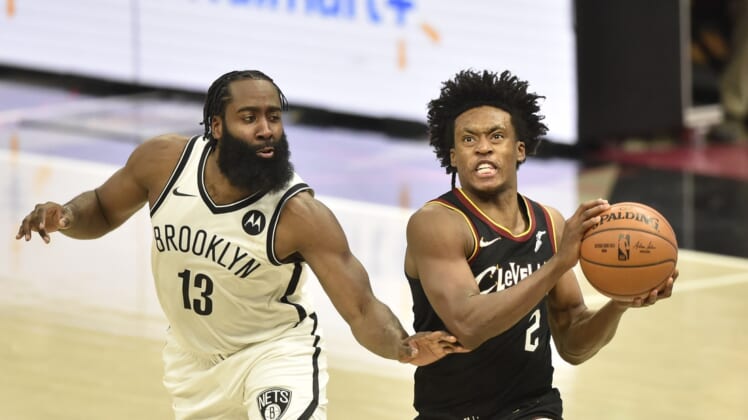 The new-look Brooklyn Nets showcased enough offense in Cleveland. They struggled on the other end, however, resulting in a lost two-game trip.

The Nets will not have much time, but they hope to correct some of their defensive issues Saturday night when they host the shorthanded Miami Heat.

Brooklyn returns home after allowing 272 points in two straight losses to the Cavaliers. Of those points, 134 came in the paint, which according to ESPN Stats and Info is its most points allowed in the paint in a two-game span in the last 25 seasons. The Nets absorbed a 147-135 double-overtime loss Wednesday when they got 96 points from Kevin Durant, Kyrie Irving and James Harden, and then lost control in the third quarter of a 125-113 loss Friday.

In their latest loss, the Nets were without Kevin Durant, who rested after playing 50 minutes Wednesday, and allowed 70 points inside. Brooklyn also was outrebounded by a whopping 62-32 margin and took their second straight loss following a four-game winning streak.

The Nets have scored at least 110 points in a team-record 11 straight games, but they are allowing 116.4 points, and Friday’s loss marked the sixth time they allowed at least 120.

“We’ve just got to find a way to play harder, dig deeper,” Nets coach Steve Nash. “We’re not a defensive roster. We have to take more pride in it. We have to win more 50-50 (balls), contest shots, fight, scrap, claw. That’s what I think is missing as much as anything schematic. We’ve got a lot of things to work on. There’s a lot to clean up.”

Among the things not needed for cleanup are the performances of Durant, Irving and Harden. Durant has scored at least 30 points in three straight games and five of his last six. Irving totaled 38 in his second game back from a two-week absence, while Harden has two triple-doubles in four games as a Net and posted a double-double (19 points, 11 assists) Friday.

“We’re kind of learning on the fly because we haven’t had many practices, but we have to have constant effort,” Harden said. “Honestly, our problem isn’t offense. We’re not worried at all about offense. It’s our defense.”

Miami enters Saturday with four losses in its past six games after never leading in a 101-81 loss to the Toronto Raptors on Friday night in Tampa. The Heat have been without Jimmy Butler (health and safety protocols) for the past six games, and he will be out Saturday.

Without Butler again, the Heat endured their second-worst loss of the season as they shot 42.9 percent, committed 19 turnovers, and fell behind by 17 after the opening quarter before tying the game briefly in the third quarter.

“Having to fight back from 21 is not easy,” Miami center Bam Adebayo said. “When you expend so much energy fighting back, trying to battle back from 21, you run out of gas. But it’s no excuse. We were right there. We should have got it done.”

Kendrick Nunn scored 22 points, but Adebayo was held to 14 and eight rebounds. It was Adebayo’s second straight game with 14 points after he scored 28 points in each of his first two games back from the health safety protocols.

Besides Butler, the Heat will be without Avery Bradley (health and safety protocols) and Tyler Herro (neck spasms). Herro has missed the last four games and will not make the trip for the two-game series.