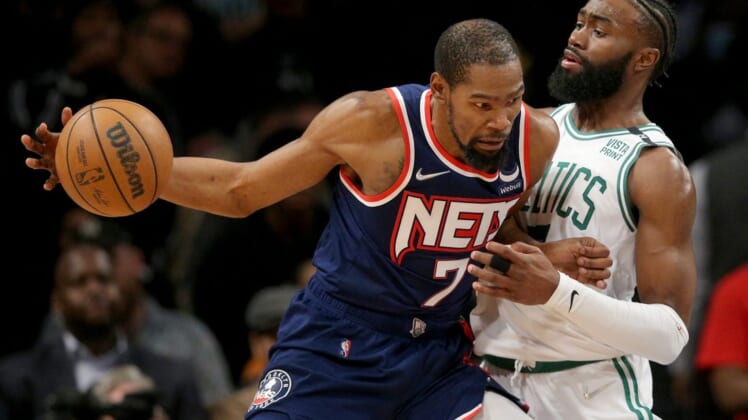 The Brooklyn Nets and Kevin Durant will “move forward” together.

The superstar’s repeated trade demands this offseason are officially old news, according to a statement released Tuesday by Brooklyn general manager Sean Marks.

“We have agreed to move forward with our partnership,” Marks said. “We are focusing on basketball, with one collective goal in mind: build a lasting franchise to bring a championship to Brooklyn.”

Marks said that he and head coach Steve Nash and owners Joe Tsai and Clara Wu Tsai met with Durant and agent Rich Kleiman in Los Angeles on Monday.

The statement did not specifically explain what made the 33-year-old forward have a change of heart.

Durant initially asked for a trade on June 30 and doubled down this month with a request to ownership that the Nets make a change at general manager and head coach or set him free.

It now appears that Nash and Marks will keep their jobs and that Durant will remain in Brooklyn as he enters the first season of a four-year, $198 million extension he signed in August 2021.

A two-time NBA Finals MVP and four-time scoring champion, Durant joined the Nets as a free agent in 2019 alongside Kyrie Irving. Durant averaged 29.9 points, 7.4 rebounds and 6.4 assists in 55 games this past season with the Nets, who traded fellow All-Star James Harden to the Philadelphia 76ers in a blockbuster deal involving Ben Simmons.

The Nets were swept by the Boston Celtics in the first round of the 2022 NBA Playoffs.

Irving, a seven-time All-Star, picked up his $36.5 million option, though the Nets are said to be willing to listen to trade offers. He played in just 29 games last season after electing not to get vaccinated against COVID-19.