Nets hoping for improved play at home vs. Knicks 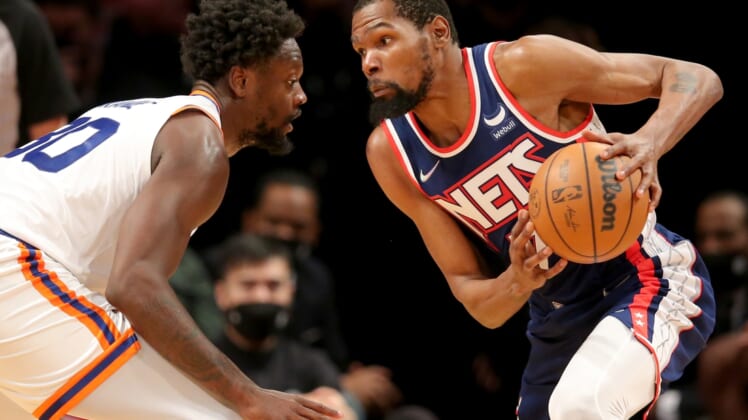 Nearly a month ago, the Brooklyn Nets stormed back from a 28-point deficit to beat the New York Knicks at Madison Square Garden without any of their stars.

This time, the Nets will have one of their stars available in Kevin Durant as they seek a third straight win Sunday afternoon against the visiting Knicks.

The Nets have swept the past five meetings, including a pair of close wins in this season’s first two clashes. They posted a 112-110 win on Nov. 30 in Brooklyn and then matched the largest comeback in franchise history on Feb. 16 to get a 111-106 win.

The last meeting saw the Nets rally with Durant recovering from the sprained MCL in his left knee that cost him 21 games as Brooklyn started James Johnson, Bruce Brown, Andre Drummond and Patty Mills. Durant watched his teammates storm back as rookie Cam Thomas scored 16 of his 21 points in the fourth quarter when they outscored the Knicks 38-19.

The Nets are 5-6 in their past 11 games after an 11-game skid and are seeking a third straight win for the first time since putting together four straight victories Dec. 10-16. They are also hoping to start playing better at home as 10 of their final 15 games are in Brooklyn where they haven’t won since Feb. 14 and are 13-18 overall.

Brooklyn is coming off a 2-1 road trip that marked the second time it scored at least 120 points in three straight games this season. The trip ended with Thursday’s 129-100 rout of the Philadelphia 76ers when Durant scored 18 of his 25 points in the first half and Seth Curry added 24 in a game in which the Nets shot 56.0 percent from the field.

“Guys rose to the occasion, we got a second win in a row, and let’s see if we can keep building,” Nets coach Steve Nash said. “I think it’s great for our confidence. We’ve had such a rough stretch here with injuries and we’re trying to put this thing together and build some cohesion and understanding.”

The Knicks would like to possess some of the same cohesion Brooklyn showed Thursday, especially in fourth quarters.

New York is 4-12 over its past 16 games, a stretch where it has blown nine double-digit leads.

The latest collapse occurred in a 118-114 loss at Memphis on Friday that denied New York a season-high fourth straight win. The Knicks rallied from a 12-point deficit in the first half but then blew a 15-point lead by getting outscored 31-18 in the fourth quarter.

Julius Randle continued to be productive with 36 points, 12 rebounds and six assists while RJ Barrett added 23. The duo missed a combined 8 of 10 shots in the fourth, however.

“It feels good, but for me I judge a lot of things on how you can get better as an individual, how can I help this team win more games,” Randle said. “I still feel I have to find a way to close out games better individually and help us more as a team down the stretch.”