Nets home, searching for answers for swarming Celtics in Game 3 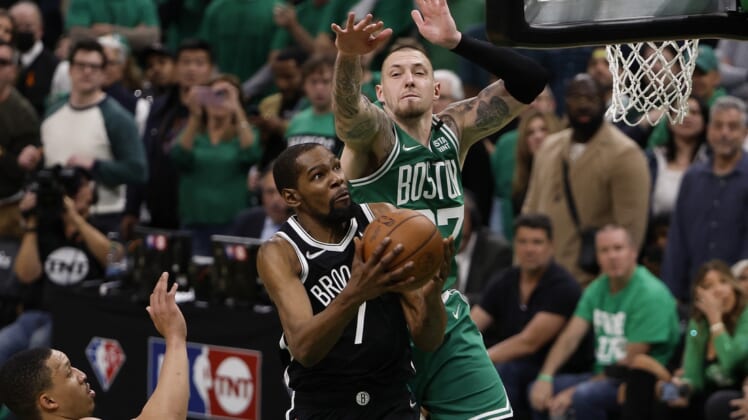 Every time Brooklyn Nets star Kevin Durant changed direction on the court on Wednesday, he encountered a Boston Celtics defender closely monitoring his every move.

It resulted in Durant missing all 10 of his field-goal attempts in the second half of Game 2, while Boston built a 2-0 series lead following a 114-107 victory.

The Celtics look to produce a similar defensive showing Saturday night when the first-round series reconvenes for Game 3 at Brooklyn.

In both games, the Celtics were able to harass Durant into a bad half. In Game 1, they held him to 2 of 12 in the first half, while on Wednesday, Durant was 0 of 10 after halftime and wound up with his fourth-lowest field goal percentage (23.5) in his 153 postseason games.

“It’s on me to just finish it and figure it out,” Durant said. “I’m not expecting my teammates or the defense to give me anything. I just got to go out there and play.

“I’ve just got to come back and play. Get ready to work, just keep grinding. I’m going to be expected to be aggressive throughout the rest of this series, so control some of that stuff and look at film and keep playing.”

Durant is encountering a defense strategy authored by a familiar face in Celtics coach Ime Udoka. He took over for Brad Stevens after being an assistant on Brooklyn coach Steve Nash’s coaching staff where his duties included defense schemes.

“It does help. It’s beneficial,” Udoka said Thursday of being familiar with Durant and the Nets. “You get to know them a little more intimately when you’re coaching them and being with them for a season.”

Said Boston’s Al Horford: “It’s definitely a benefit for our group, because he just has a good sense of the things that they want to do and how they want to play.”

The Celtics are trying to move to the verge of a sweep after an impressive fourth quarter in Game 2. They outscored the Nets 29-17 and held them to 5 of 19 from the field (26.3 percent) in the final 12 minutes.

Boston also got standout showings from Jaylen Brown and Jayson Tatum in the final 12 minutes. Brown scored 10 of his 22 points while Tatum offset a 5 of 16 performance by scoring seven straight points down the stretch, including a 3-pointer that essentially sealed the victory with about two minutes left.

“This was like an old-fashioned, old-school playoff game,” Tatum said. “You just have to grind it out. That’s what we did, we just stuck with it. Proud of the guys and how we kept responding all game.”

Durant is playing his first postseason game in Brooklyn since last year, when he scored 48 in Game 7 of the Eastern Conference semifinals against the Milwaukee Bucks. Brooklyn was eliminated anyway.

While the Nets are hoping to see a similar showing from Durant, they are hoping he has more help from Kyrie Irving. Irving scored 39 in the series opener but on Wednesday he was held to 10 points Wednesday on 4-of-13 shooting, his third-lowest scoring total in a postseason game.