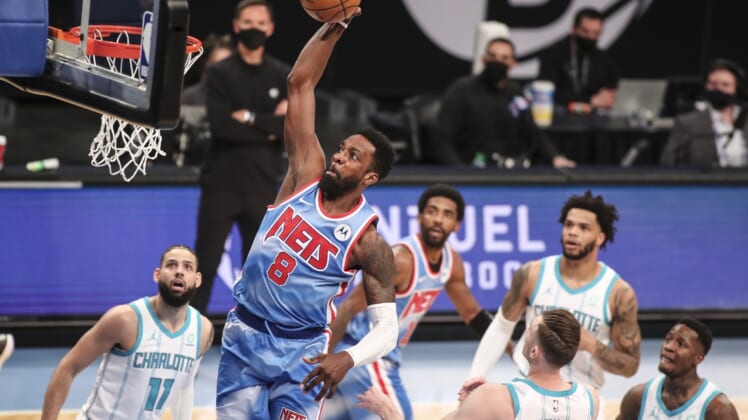 The Nets, who have been bemoaning recent slow starts, broke out to a 32-11 lead after one quarter.

Landry Shamet and Tyler Johnson came off the bench for Brooklyn to score 17 and 15 points, respectively. Kyrie Irving racked up 15 points and 11 rebounds and Bruce Brown had 14 points for the Nets, who were 20-for-45 on 3-point attempts. Green, Shamet and Johnson all made five 3-point baskets.

Gordon Hayward and Devonte’ Graham each scored 13 points and Terry Rozier had 12 points as the top scorers among Charlotte’s starters. Off the bench, Malik Monk had 11 points and Miles Bridges provided 10 points for the Hornets, who are 1-1 on a six-game road swing.

The Nets played without Harden, who averages 26.1 points per game. He suffered a hamstring injury a night earlier and sat out the fourth quarter in the team’s comeback victory against the Houston Rockets. His condition isn’t expected to keep him out of the lineup for long, but the Nets did fine without him for at least one game.

The shooting was so good for the most part that the Nets were hampered by 15 turnovers. They benefited from a 56-43 advantage in rebounding.

Brooklyn put together this performance despite receiving just nine points from Joe Harris, who was 3-for-10 from the field. Irving turned in eight assists and Harris had six assists.

Charlotte shot 34.9 percent from the field. The Hornets had another low-scoring quarter with 17 points in the third.

Brooklyn and Charlotte have split two games this season.