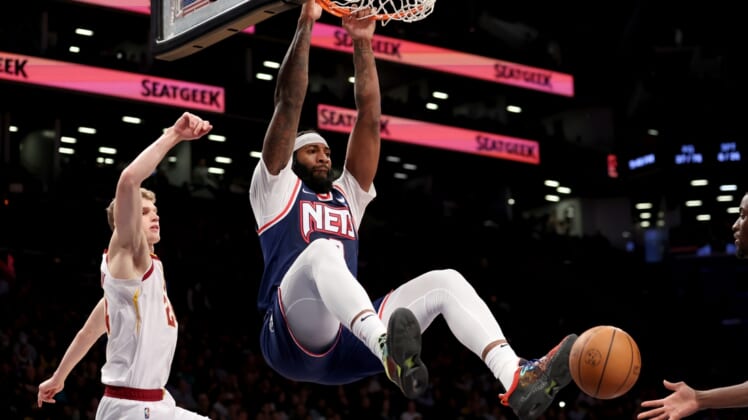 The Eastern Conference play-in game Tuesday will have a familiar feel after the Cleveland Cavaliers and Brooklyn Nets just faced each other on Friday.

The Cavaliers hope this visit to New York turns out much better than the one that ended in a 118-107 defeat over the weekend.

The Nets outscored Cleveland 35-19 in the fourth quarter in that game. The Cavs also never found an answer for All-Star forward Kevin Durant, who led all scorers with 36 points.

The teams finished the regular season with a 44-38 record, but Brooklyn earned the No. 7 seed by virtue of winning their head-to-head season series 3-1.

The winner of Tuesday’s game will advance to the first round of the playoffs against the No. 2 seed Boston Celtics next week. The loser will play Friday against the winner of the 9-10 play-in game between the Atlanta Hawks and Charlotte Hornets.

The Nets had to hold off Indiana 134-126 on Sunday to earn the seventh seed.

“We got up to (seventh place),” Brooklyn head coach Steve Nash said. “We were 10th a week ago.”

Nash said having played Cleveland last week is beneficial. Then he took a wider look at the situation. “It’s helpful for both teams,” Nash said. “It’s whoever plays better will win.”

The Nets had four players score 20 or more points against the Pacers, including former Cavs guard Kyrie Irving, who had a game-high 35 points.

“When he’s a playmaker, it shows you how special he is,” Irving said. “He has a poise about him. He plays the game the right way.”

Cleveland ended the regular season by beating a band of Milwaukee reserves 133-115. Forward Kevin Love was productive in his 15 minutes off the bench with 32 points and 10 rebounds. He was 8 of 11 from 3-point range.

”I like our chances when it comes down to a dog fight,” Love said. ”That’s what it’s going to be come Tuesday night.”

After four meetings between the teams this season and the recent date, there is nothing to hide.

“We understand who they are and how they defend us,” Cavs coach J.B. Bickerstaff said. “I feel we are in a good place and what it takes for us to win.”

Cleveland would receive a big boost if All-Star center Jarrett Allen could return from a broken left middle finger. He missed the last 18 games of the regular season, with the Cavs going 7-11 in that stretch. Allen had an intense workout before Sunday’s game and is no longer wearing a splint.

Bickerstaff said he wanted his young club to appreciate the moment of competing in the play-in game. The Cavs were not considered a threat to make the playoffs this year, yet they finished with a 22-game improvement in the win column from a year ago.

The emergence of All-Star point guard Darius Garland, along with rookie Evan Mobley, turned Cleveland into a playoff contender. Garland leads the team in scoring (21.7 points per game) and assists (8.6).

“These opportunities are not promised,” Bickerstaff said. “They are not guaranteed. I want them to get a taste of it and have a desire to get back.”

The Over/Under market has also seen notable movement. After opening at 230.5 at PointsBet it shifted to 226.5 by Tuesday with the Over drawing 69 percent of the bets and 58 percent of the handle.

The story has been similar at BetMGM, where the market opened at 229.5 but moved to 226.5 by Tuesday with the Over backed by 55 and 51 percent, respectively.