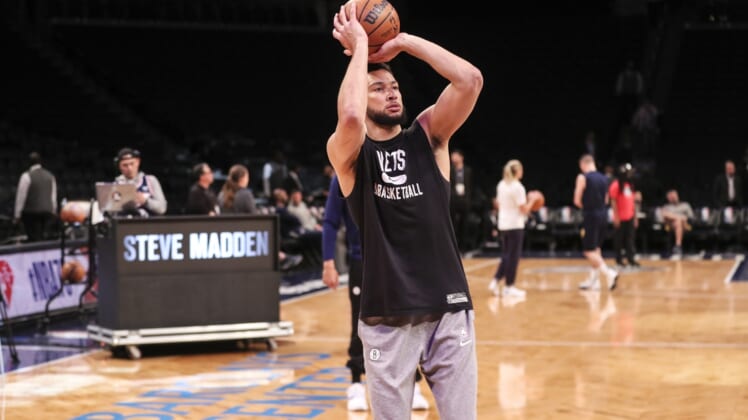 If Ben Simmons avoids setbacks, the Brooklyn Nets expect him to be available for Game 4 of the first-round NBA playoff series against the Boston Celtics.

It would be Simmons’ debut with the Nets and first game since June 2021 in the playoffs as a member of the Philadelphia 76ers. Game 4 is scheduled for Monday night in New York.

He sat out the first part of the season in a dispute with the 76ers. Since a trade-deadline deal to the Nets in Feburary, Simmons hasn’t played because of a back injury.

But ESPN reported Simmons potentially could be cleared to play Saturday in Game 3, based on the Nets’ policy for injured players that requires three contact practices before playing in a game. Simmons held up to contact Monday, head coach Steve Nash said, and was expected to participate in a contact workout and play 4-on-4 on Wednesday.

Game 2 is set for Wednesday in Boston, with the Celtics holding a 1-0 lead in the best-of-seven series.

“I wouldn’t be able to say anything about (Game 3 availability),” Nash said. “… We have to also consider it’s a nine-month absence or whatever it is, so it’s not just like he had a six-week absence, so I think this is a pretty unique scenario. It’s not as linear as maybe the other kind of in-season injuries.”

Nash said the Nets used the barometer of three contact practices in returning Kevin Durant to game action from a leg injury earlier this season, but he pointed out the stark contrasts in those scenarios. Not to mention the challenge of returning for a team debut in the midst of a heated playoff series with the Celtics.

Nash said he believes Simmons can “physically adapt” to live action. Being assured he’s otherwise ready is also part of the equation.

Durant said he heard “good reports” on Simmons. However, he wants to see him in the full team environment at practices before making any assessment on Simmons’ readiness.

Durant noted he “didn’t really see him explode or play against anybody” in Monday’s workout.

The 6-11 Simmons has a unique skill set and played primarily with the ball in his hands with the 76ers in a playmaking role. He’s spending time daily with shooting coach Kyle Korver to improve his range and touch, Nash said. In four previous seasons, Simmons has five career 3-pointers and 34 attempts, which underscores the idea that he’s not the typical NBA guard.