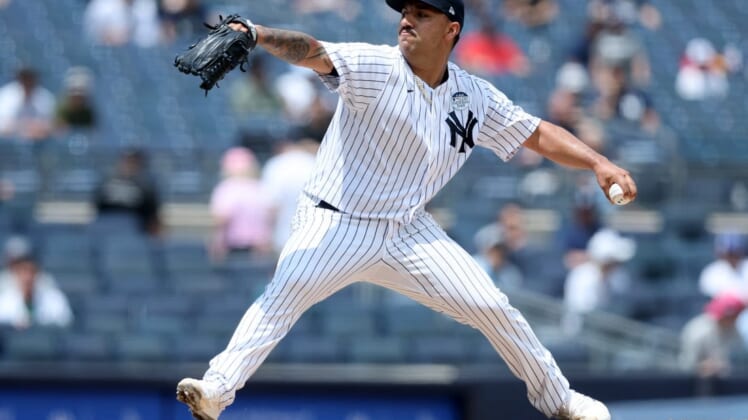 Before heavy rain resulted in an 88-minute delay after the eighth, Cortes (5-1) held the Angels to five hits and lowered the AL’s second-best ERA behind Texas left-hander Martin Perez to 1.50. The crafty left-hander struck out seven, walked two and posted his 19th straight outing of allowing three runs or fewer — one shy of the team record set by Russ Ford from Aug. 9, 1910 to May 27, 1911.

Judge moved five ahead of Houston slugger Yordan Alvarez when he connected off Ohtani to open the third and give the Yankees a 3-0 lead.

Judge hit his latest homer after Matt Carpenter capped an 11-pitch at-bat with a 410-foot homer into the second deck to open the game. Gleyber Torres also homered in the first and DJ LeMahieu connected in the fifth.

Marwin Gonzalez hit an RBI double and pinch hitter Miguel Andujar lifted a sacrifice fly as the Yankees moved 20 games over .500 and won for the sixth time in eight games since dropping three straight May 22-23.

Aaron Hicks collected three hits for the Yankees, who totaled 13 hits after cruising to a 9-1 rout in Tuesday’s series opener.

Ohtani (3-4) lasted three-plus innings and allowed four runs on eight hits for his second rough outing in New York. Last season, on June 30, he recorded two outs and allowed seven runs before the Angels scored seven times in the ninth off Aroldis Chapman in an 11-8 victory following a lengthy rain delay.

Ohtani also tied a career high by allowing three homers for the second time. He singled in the fifth off Cortes, who then picked Ohtani off at first base.

Luis Rengifo hit an RBI single in the eighth off Clarke Schmidt as the Angels lost their season-high seventh straight. Wandy Peralta escaped a bases loaded jam in the eighth before the rainstorm and quickly recorded the final three outs when play resumed for his first save.