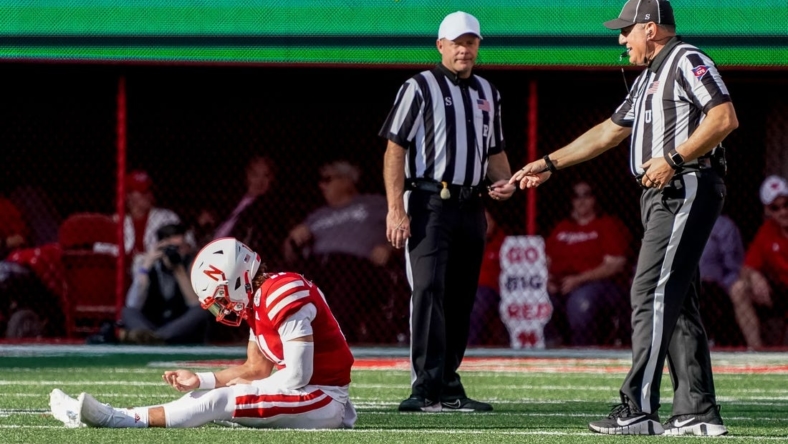 Nebraska quarterback Casey Thompson sustained an apparent injury to his right hand in the second quarter against Illinois in Lincoln, Neb., on Saturday and was not expected to return.

Thompson, who was coming off a 354-yard passing performance in a loss to Purdue on Oct. 15, was hurt when he was hit while releasing a pass with 6:31 left before halftime.

Illinois’ Sydney Brown intercepted the fluttering pass and returned it 37 yards to the Nebraska 11-yard line. Chase Brown later scored on a 1-yard run to vault the Fighting Illini to a 13-9 lead.

Sophomore quarterback Logan Smothers took over at quarterback for the Cornhuskers for the rest of the half, completing his only pass attempt and rushing twice for six yards.

As halftime came to an end, Thompson returned to the Nebraska sideline without a helmet and did not join the team for second-half warmups, according to the Illini Inquirer.

Redshirt freshman Chubba Purdy was at quarterback for Nebraska to start the second half.

Thompson, a junior who is in his first year with Nebraska after three seasons at Texas, went 7 of 15 for 172 yards, one touchdown and two interceptions in the first half.

He began the day with 4,273 yards passing in his career with a completion percentage of 63.9 percent and 41 touchdowns versus 17 interceptions.