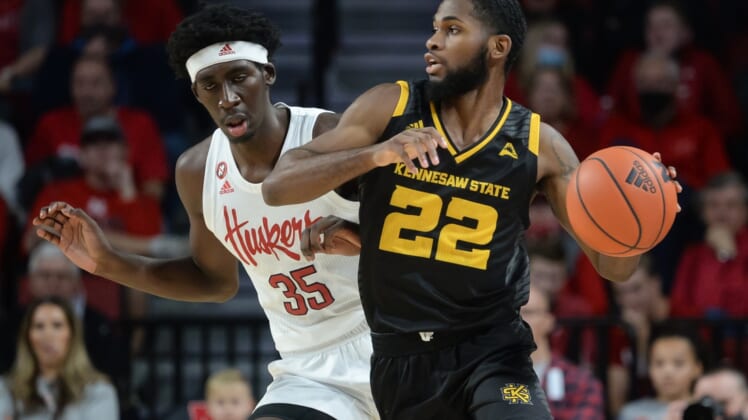 Bryce McGowens and Derrick Walker added 11 points apiece for the Cornhuskers (6-7). The balanced attack helped offset a game-high 27 points from the Owls’ Terrell Burden and lift Nebraska to victory for the first time since a home decision over South Dakota on Nov. 27 capped a four-game winning streak.

The Owls (4-8) shot 41.3 percent and committed 21 turnovers, the most by a Nebraska opponent this season, in losing for the fourth time in five games. Chris Youngblood had 11 points and 12 rebounds for Kennesaw State, while Jamir Moultrie scored 12 points.

Burden shot 10-for-14 from the floor and contributed eight rebounds and six assists.

Nebraska led by as many 25 points while hitting 52.6 percent from the floor, including a much-needed — and thus far out of the ordinary — 15-for-29 effort (51.7 percent) from 3-point distance.

Long-range shooting lifted the Cornhuskers to a 45-34 halftime lead. Merely a 25.2 percent shooting team from 3-point range entering the game, Nebraska drilled 9 of 17 attempts from beyond the arc in the first half, with six players connecting on at least one trey.

Kennesaw State raced to a 16-8 lead in the first five-plus minutes before Nebraska came alive, ripping off a 15-0 run to take a lead it never relinquished. The spurt was bookended by 3-pointers from Tominaga and C.J. Wilcher.

The Owls responded and drew within three on Moultrie’s second-chance trey with 5:32 left before the half, but Nebraska regrouped again, scoring 18 of the next 28 points. Fittingly, the Cornhuskers closed the sequence with a Trevor Lakes 3-pointer that narrowly beat the halftime buzzer.

Nebraska finished with 20 assists on 30 made baskets, though the Cornhuskers committed 17 turnovers.