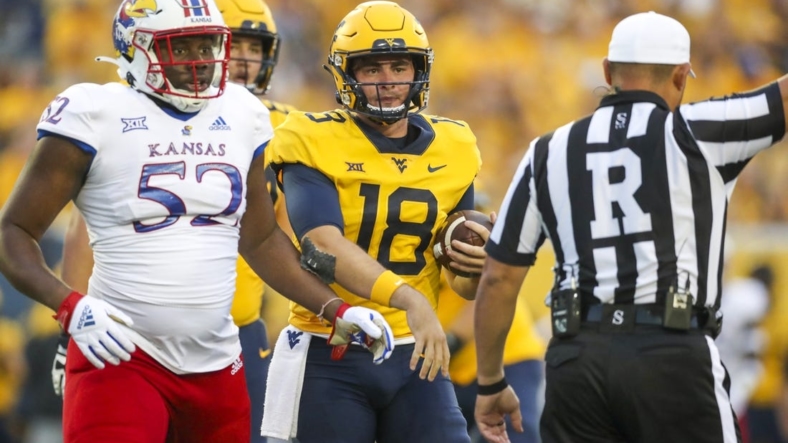 The West Virginia Mountaineers are 0-2 for the first time in more than four decades, and the vultures are circling Morgantown.

With pressure ramping up on coach Neal Brown, Saturday’s game at home against Towson is a must win, especially considering the Mountaineers have never lost in 22 games against FCS teams.

In his fourth season, Brown has a 17-20 record and has never pushed the Mountaineers into the rankings. Losing at home to perennial Big 12 doormat Kansas 55-42 in overtime on Saturday put the Mountaineers’ rabid fanbase on DEFCON 1.

Not since 1979 — when Frank Cignetti was eventually fired after a fourth consecutive losing season — has this once-proud program started a season with successive losses. Cignetti is remembered mostly as the coach who held the job between College Football Hall of Fame coaches Bobby Bowden and Don Nehlen.

On Monday, West Virginia athletic director Shane Lyons felt compelled to issue a statement, trying to quell some of the discontent.

“Everyone involved knows that the on-field results have not met expectations and absolutely no one is satisfied,” Lyons wrote.

During his weekly media availability on Tuesday, Brown said he understood the frustrations of fans, recalling his childhood as a fan of the University of Kentucky.

“I can remember a lot of rides home in an old beat-up van with my uncle and some of their friends and bitching about how they played and being frustrated because they spent money on tickets and concessions and all those types of things,” Brown said. “I get that.”

In the 38-31 season-opening loss at rival Pitt, WVU rallied to hold a seven-point lead before the Panthers scored twice in the final four minutes, with the game-deciding touchdown coming with 2:58 remaining on a 56-yard pick six.

A week later, Mountaineers quarterback J.T. Daniels threw another critical interception that was returned for a touchdown by Kansas – this time actually ending the game.

Those are the only two interceptions of Daniels in 80 passes in the first two games, as he has completed 63.8 percent of his passes for 569 yards and five touchdowns. But he’s still 0-2 as the West Virginia starting quarterback since transferring from Georgia, where he had transferred to from USC.

Coming off a 4-7 season, Towson (2-0) has won a pair of one-possession games, including the 29-21 victory over Baltimore rival Morgan State last week.

Tigers quarterback Tyrrell Pigrome, who played four years at Maryland before starting last season for Western Kentucky, rushed for 124 yards and completed 14 of 25 passes for 157 yards and three touchdowns.

“I am proud of the resilience of this football team,” Towson coach Rob Ambrose said. “We didn’t get rattled and we found a way to win a game.”