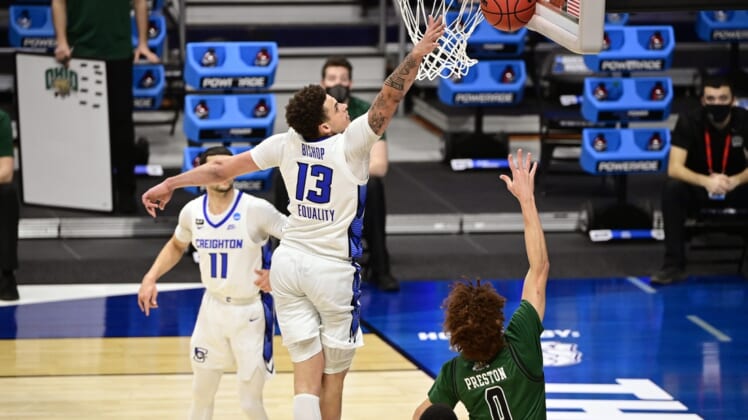 Marcus Zegarowski fueled a first-half surge and No. 5 seed Creighton cruised to a 72-58 victory against No. 13 seed Ohio on Monday in an NCAA Tournament West Region second-round game in Indianapolis.

Read More: RECAP: No. 5 Creighton escapes in win over No. 12 UC Santa Barbara

Christian Bishop had a double-double for the Bluejays with 12 points and 15 rebounds. Damien Jefferson scored 15 points, Denzel Mahoney added 11 and Mitch Ballock had 10.

Ohio (17-8), which shocked defending national champion Virginia in the first round, missed 10 of its last 11 field-goal attempts in the first half as the Bluejays pulled away.

The Bobcats were held well below their season average of 80.1 per game. Their previous low this season came in Saturday’s 62-58 victory over the fourth-seeded Cavaliers. Leading scorer Jason Preston (16.3 per game) managed just four points on 1-of-10 shooting, with nine rebounds and seven assists.

Ohio couldn’t get the deficit under double figures until Mark Sears’ free throw made it 65-56 with 2:26 to play.

In 21 previous NCAA Tournament appearances, Creighton had never won consecutive games. The last time it was one of the final 16 teams remaining came in 1974, when the field only included 25 schools.

The Bluejays came out cold, missing their first five shots. They grabbed their first lead at 13-11 on Zegarowski’s 3-pointer with 10:44 remaining. He added two more triples during the 20-5 run.