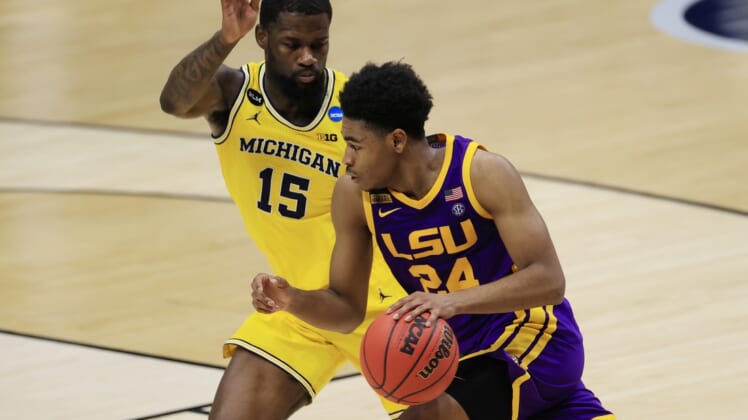 Chaundee Brown scored a season-high 21 points off the bench and Michigan, the top seed in the East Region, eliminated LSU 86-78 in the second round of the NCAA Tournament at Indianapolis on Monday.

Dickinson made a layup early in the second half to give Michigan a two-point lead. LSU reeled off the next eight points, including four by Smart, to gain a 51-45 lead.

The Wolverines responded with a 10-0 run that included 3-pointers from Mike Smith and Brooks and a dunk by Brown.

A 12-3 LSU run put the Tigers back on top, 63-58. That included seven points from Smart and five from Thomas.

Michigan answered with nine unanswered points, seven from Brown, to regain the lead and it never trailed again.

Brown drained a 3-pointer from the wing with just under six minutes left for a 72-64 Wolverines lead.

Wagner knocked down a 3-pointer with 3:56 left to make it 79-70. He added a dunk and layup down the stretch and the Tigers never got closer than six points.

Brooks had 13 first-half points to lift the Wolverines to a 43-42 halftime advantage.

Thomas, who racked up 19 first-half points, scored 10 points in the first six minutes of the game. He got fouled on a 3-point attempt with 8:18 left in the half and made each free throw to give LSU a 27-19 lead.

Late in the half, Michigan took the lead by scoring seven unanswered points, including three free throws by Wagner. Thomas scored a basket with two seconds left in the half to pull his team within one.