With just four weeks remaining in the college football regular season and that cool November air leaving no doubt summer is long gone, we’ve officially reached the meat of the schedule. And not a moment too soon.

Aside from No. 1 Mississippi State and No. 2 Florida State, who are both unbeaten and not expecting big challenges on Saturday, the rest of the national picture is quite murky entering the weekend. There are 10 teams within the College Football Playoff selection committee’s Top 15 with just one loss.

To this point, there have been more questions than answers most weeks, but a seismic shift is just hours away. Of those 10 one-loss teams, six are facing off against each other and another two are going to battle against a tough conference opponent, each with just two losses on the season.

Which means the pool of potential championship contenders is about to be cut in half. Of the six can’t miss games on Saturday, five have serious national consequences on the line. For those who have problems with prioritization, here they are conveniently ranked:

Considering Notre Dame’s only loss came on a controversial touchdown-negating penalty in the final seconds against a Florida State team that hasn’t lost in a million years (give or take), the fact they’re ranked below Arizona State, who lost 62-27 to a good but not great UCLA in late September, is a bit of a puzzler.

Not that it matters, since both teams will have to opportunity to put distance between each other on Saturday. With four-straight wins, the Sun Devils have been getting some love in the national conversation, but they’ll have to employ the divine hand of someone who resides just a wee bit north of their mascot to end up in the CFP. Even if they ice the Irish, defeating the Ducks in the Pac-12 championship is a long shot at best.

Notre Dame is traveling to Arizona in search of a signature win and a punching bag to help work off pent up frustration stemming from that brutal loss to FSU. Whether the Irish cruise or crash depends largely on the play of quarterback Everett Golson, whose major weakness is turnovers. When Golson is at his best and protecting the ball, Notre Dame’s potent offense, buoyed by stud sophomore running back Tarean Folston, is damn near unstoppable.

Prediction: Notre Dame in the opposite of a squeaker. 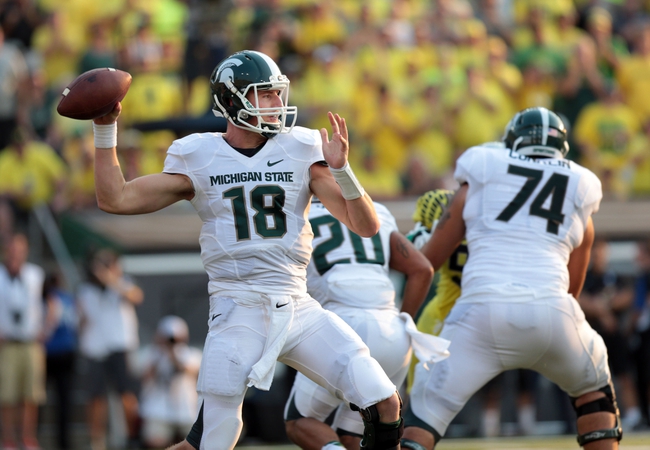 This is a big game that would be much bigger if Ohio State didn’t have a two touchdown travesty of a loss to a tragically terrible Virginia Tech team, which has been haunting them since Week 2. Michigan State may be able to overcome their Week 2 loss to Oregon, but it’s hard to imagine the Buckeyes overcoming theirs and making the playoff under any circumstance.

The Buckeyes do have a chance for payback against the Spartans, who ended their 24-game winning streak and (likely) BCS championship berth last season and have a proud tradition of crushing dreams in Columbus. Playing in a weak Big 10, neither team has been challenged in two months, so this game will give us a better idea of who these two really are.

Michigan State’s exceptionally weak schedule has made it difficult to make up ground in the CFP rankings, but a signature win against Ohio State could advance them as many as three spots, depending on how the rest of the day plays out. They’re guaranteed to move up at least one.

Prediction: Michigan State has proven more against subpar opponents than Ohio State, who almost lost to Penn State a few weeks back after blowing a 17-0 halftime lead. BOOK IT! East Lansing’s landscape will be illuminated with the light of 10,000 burning couches come midnight. 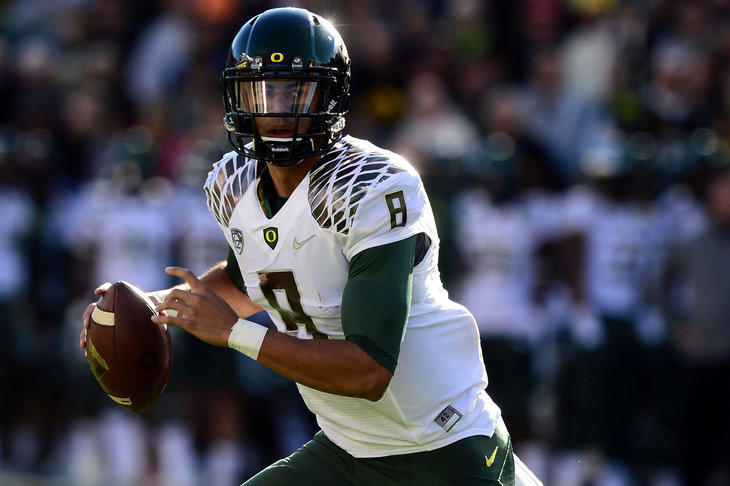 This game only moved ahead two spots because of Oregon’s penchant for blowing it in November. The Ducks easily defeated Pac-12 rival Stanford last week, dodging the bullet that often kills their season, which is good for Ducks fans because they have no margin for error after being upset by Arizona last month.

With the exception of playing on the road, everything is on Oregon’s side here. Their fifth ranked offense is led by Heisman favorite Marcus Mariota, who has one more shot at bringing a national title to Eugene before departing for the NFL. Aside from the Pac-12 championship, this is the last hurdle on their schedule.

And Utah is definitely a hurdle. Their strength is defense, having held opponents to an average of 21 points per game this season—that’s practically a shutout in college football these days! Mariota is absolutely up to the task though. The Utes can bring pressure and are going to be in his face all night, but expect another Heisman-worthy performance from Mariota.

Both of these Big 12 teams are still in the CFB conversation—just barely. TCU barely survived against WVU last week, a last minute field goal put the Horned Frogs ahead by just one point as time expired, winning 31-30. That happens to be the exact same score Kansas State beat Oklahoma by a few weeks ago.

It’s no surprise one spot separates these two teams at the moment—the committee probably just lumped them together temporarily, knowing they’d separate themselves this week. The winner will still need some help from the top, but the loser will be kicked to the curb.

This game is a classic offense vs. defense battle. TCU quarterback Trevone Boykin has been racking up 361 yards (309 passing, 52 rushing), with 2.75 touchdowns and .5 interceptions as his per game average. Their revamped offense is back in a big way, but really struggled against the Mountaineers.

K-State, on the other hand, have the No. 1 defense in the conference and are among the Top 15 in the nation. Their only loss came against No. 3 Auburn in September. The Tigers, who have averaged over 40 points per game this season, were held to just half that in their 20-14 win over the Wildcats.

Prediction: K-State slows that TCU offense and distances itself from the defense impaired Big 12. All you SEC haters with your burning rage and irrational conspiracy theories knew this one was coming! Despite the fact that you’re probably going to deny it, there is simply no denying this is the week’s marquee matchup.

With two division losses in the daunting SEC West, LSU is largely out of contention nationally and the longest of long shots for a shot at the conference, which means the Tigers are playing their championship in the Bayou Saturday night. Playing spoiler to rival Alabama would mean a lot more than some inconsequential win over a second-tier Big Ten team in the Capitol One Bowl anyway.

The good news for Nick Saban’s boys is they control their own destiny—win out and they’re the (likely) SEC champion and in the playoff. The bad news is three of their final four are against LSU, No. 1 Mississippi State and No. 2 Auburn. Obviously Bama isn’t going to come into this game unprepared, but if they start looking ahead for even a second,  they could find themselves on the outside looking in.

LSU isn’t a better team than Alabama, but they’ve got bits and pieces working for them. Tiger Stadium is one of the most intimidating venues in sports and the ultimate home field advantage—in the Miles’ era LSU is 46-3 at home on Saturday night. The biggest threat to Bama is the boost their opponents receive from playing free from the crushing weight of expectations.

Sure LSU could win, but nobody expects them to. And what’s more dangerous than a Tiger with nothing to lose?

Prediction: LSU I’ve been going back and forth for days. Alabama is better in almost every phase of the game when they’re firing on all cylinders, but this just feels like an upset to me.