North Carolina State big man Manny Bates dislocated his right shoulder in the season opener Tuesday against Bucknell and will miss the rest of the season, the school announced Friday.

Bates missed the two exhibition games before the season because of a shoulder issue. He played less than one minute in the 88-70 win over Bucknell.

“I’m heartbroken for Manny because he’s overcome so much to become the incredible player he is,” coach Kevin Keatts said in a statement. “He does everything the right way. He doesn’t take shortcuts. He’s a prime example of everything I want an NC State basketball player to be on and off the court.

“I know Manny has the work ethic and positive mental attitude to come back from this. I know he’ll come back stronger and I know Manny’s best basketball is still ahead of him.” 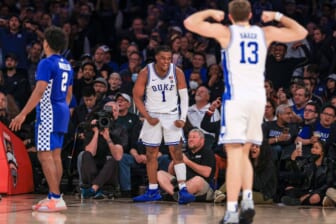 The 6-foot-11 Bates, a redshirt junior, averaged 9.8 points, 5.9 rebounds and 2.7 blocks per game last season. He has led the Atlantic Coast Conference in blocks each of the past two seasons.

Bates, from Fayetteville, N.C., was a four-star recruit in the Class of 2018.

The Wolfpack will host Colgate on Saturday in Raleigh, N.C.