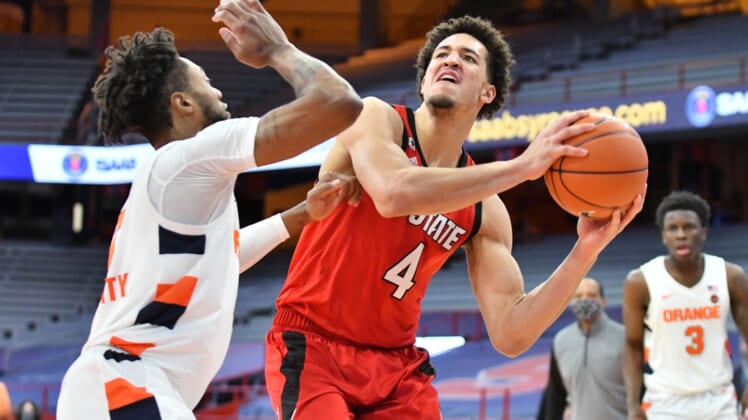 Davidson still has enough firepower to concern North Carolina State even though the in-state teams haven’t met in more than a decade.

The Wolfpack has some production it can count on, too, when the teams collide in the first round of the 16-team National Invitational Tournament on Thursday night in Denton, Texas.

“Everyone I’ve spoken to has talked about that, they think they’re one of the best if not the best team in the Atlantic 10 this year,” NC State coach Kevin Keatts said. “They’ve had pauses that certainly didn’t work in their favor, just as everyone else has.”

NC State leads the series with Davidson by 69-14, but the Wildcats won the most-recent meeting with Stephen Curry producing a big outing with 44 points in a December 2008 matchup.

Third-seeded NC State (13-10) had won five consecutive games until the Atlantic Coast Conference tournament, losing to Syracuse for the third time this season.

The late-season success has the Wolfpack anxious for another taste of competition.

“From what I’ve seen from our guys the last couple of days, I see excitement,” Keatts said. “I see guys that want to play. We’re blessed to be one of 84 teams left to be playing in our season. I think that’s important.”

The Wolfpack could benefit from more games, especially with a core of youthful players.

“In our case I do because we have so many young guys,” Keatts said. “If we were taking a bunch of seniors and playing in the NIT, I’m not sure that that would help us in the following year. Our roster has shifted from older guys with (injured players) Thomas Allen and Devon Daniels to without having those guys now. I think it could certainly pay off.”

Second-seed Davidson (13-8) played only six games since late January, going 3-3 in those.

Davidson guard Kellan Grady is 10 points away from 2,000 for his career. He’s a senior and a four-time, all-Atlantic 10 Conference selection.

The Wildcats have a prolific scoring attack from the perimeter with Hyunjung Lee hitting 43.9 percent of his 3-point attempts.

“I thought our guys fought from start to finish, and they emptied their tanks and gave everything they had,” veteran Davidson coach Bob McKillop said.

NC State has a rugged interior defense, led by shot-blocking specialist Manny Bates. He has averaged 2.8 rejections per game.

NC State was also in the 2019 NIT, reaching the quarterfinal round with a pair of home victories. Like Davidson, the Wolfpack was eliminated by Lipscomb in that version of the NIT.

This is the ninth time that Davidson will compete in the NIT.

Thursday’s winner meets either Colorado State or Buffalo in the second round.