Jun 7, 2021; Brooklyn, New York, USA; Brooklyn Nets guard Kyrie Irving (11) points to the crowd after making a three point shot in the fourth quarter against the Milwaukee Bucks during game two in the second round of the 2021 NBA Playoffs. at Barclays Center. Mandatory Credit: Wendell Cruz-USA TODAY Sports

The NBA isn’t forcing players to get vaccinated against COVID-19, but it is going to withhold pay for any player that misses games due to a local mandate.

“Any player who elects not to comply with local vaccination mandates will not be paid for games that he misses,” read a statement from NBA spokesman Mike Bass on Wednesday.

Mandatory vaccinations for players have been a non-starter with the National Basketball Players Association, leading the league to institute strict protocols for unvaccinated players.

Local mandates supersede the NBA, however, meaning players in New York and San Francisco will have to sit out home games if they remain unvaccinated. 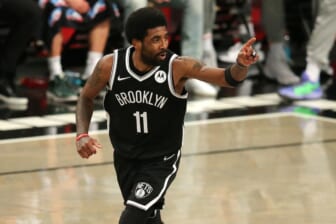 Roughly 90 percent of players have been vaccinated, but some highly publicized comments made by outspoken stars in the lead-up to training camp have raised eyebrows.

Brooklyn’s Kyrie Irving and Golden State’s Andrew Wiggins are two of the biggest stars to oppose getting the vaccine.

Both play their home games in cities with local vaccine requirements that would bar them from playing.

Irving is scheduled to make $34.9 million this season, while Wiggins is due $31.6 million.