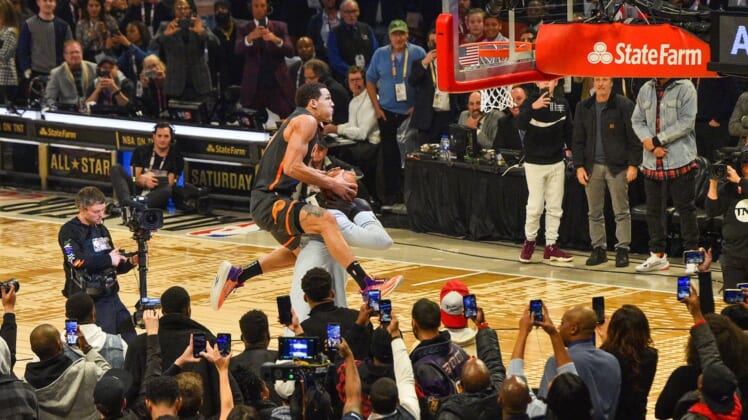 While a number of the NBA’s top stars have opened lobbied against the NBA holding an All-Star Game this season, the league appears committed to holding the contest and beefing up the entertainment.

The NBA plans to hold the annual dunk contest at halftime of the March 7 All-Star Game in Atlanta, ESPN reported Wednesday.

The skills competition and 3-point shooting contest, which typically are paired with the dunk contest on a different night from the All-Star Game during a weekend-long celebration, also would be held on the same night as the Game this year, according to ESPN.

The report indicated that the league and the National Basketball Players Association likely will formalize the health and safety protocols surrounding the All-Star festivities later this week.

ESPN added that the plan calls for players to come to Atlanta via private planes on March 6, utilize private housing, compete in the game on March 7 and then fly out immediately postgame.

Among the NBA stars who have come out against the NBA holding an All-Star Game amid the coronavirus pandemic are LeBron James, Kawhi Leonard, Giannis Antetokounmpo and James Harden.

James said he has “zero energy and zero enthusiasm” for the exhibition contest and maintained that plans to hold the contest amid the health crisis are “a slap in the face” to the players.

Antetokounmpo said, “Like, I can’t worry about the All-Star Game. I want to see my family. … If they tell us we’re gonna show up, we’ve got to do our job. … But at the end of the day inside, deep down, I don’t want to do it. I want to get some break.”

Leonard added, “I mean, we all know why we are playing it. You know, there’s money on the line,” he said. “It’s an opportunity to make more money. … Just putting money over health right now, pretty much.”

Harden said, “I know what the reasoning is for, but I feel like, especially with a condensed schedule, it feels like everything was forced upon players.”