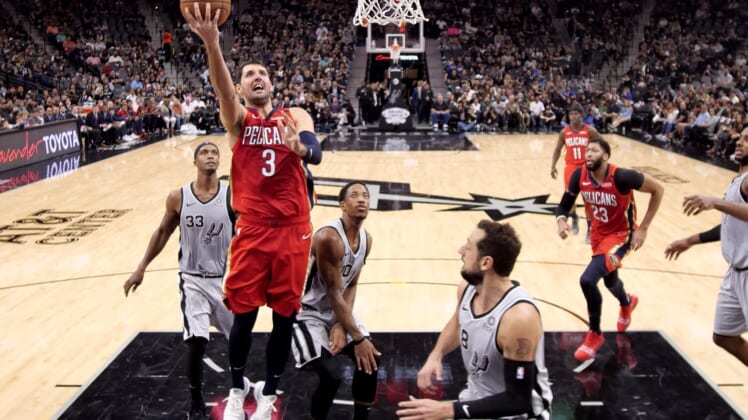 If the New Orleans Pelicans are going to trade star big man Anthony Davis, it makes perfect sense for the team to blow it all up and start anew with a rebuild.

While this could be a long way from coming to fruition, ESPN’s Zach Lowe had an interesting tidbit in his recent podcast. The NBA insider noted that New Orleans has made starters Nikola Mirotic, Julius Randle and E’Twaun Moore available in trade talks.

“New Orleans is known for perhaps playing some misdirection, so teams didn’t know what to think of this. One team made of it, their guess and/or impression was, New Orleans was trying to get picks that it then flips for a big, big piece in a save-the-season trade,” Lowe noted.

Is this connected to Davis demanding a trade? We’re not too sure. Davis’ demand became public record on Monday, but reports surfaced that he had told the Pelicans about his request days earlier. If so, the timeline coincides with Lowe’s reporting.

As Lowe noted, some around the Association believes that New Orleans put these three players on the block in an attempt to add a third star behind Davis and Jrue Holiday. That wouldn’t make a ton of sense in that it would seriously hinder the Pelicans’ depth and outside shooting ability.

The likelier scenario here is that Mirotic, Randle and Moore are being made available as part of a long-term rebuild strategy.

The headliner here is obviously Mirotic. He’s been stellar this season — averaging 16.7 points and 8.3 rebounds on 37 percent shooting from distance.

Randle, 24, signed a two-year contract with New Orleans this past offseason, but can opt out of said deal and become a free agent following the 2018-19 campaign.

He’s also been pretty good for the Pelicans — averaging 19.9 points and 9.3 rebounds in under 30 minutes per game. Both would likely bring Nola a pretty decent haul if dealt before next month’s deadline.