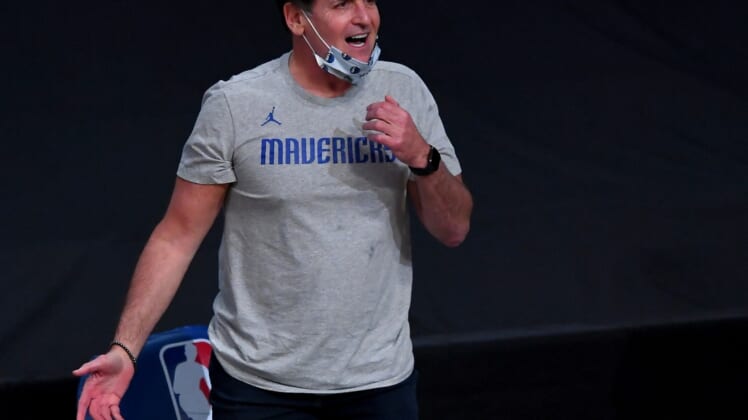 The NBA told its teams Wednesday afternoon that they must play the national anthem before home games, a day after Dallas Mavericks owner Mark Cuban confirmed his team hadn’t been doing so.

“With NBA teams now in the process of welcoming fans back into their arenas, all teams will play the national anthem in keeping with longstanding league policy,” the NBA’s statement read.

The Mavericks have played 11 regular-season home games this season, but Monday night’s game against the Minnesota Timberwolves was the first with fans in attendance.

Cuban confirmed to The Dallas Morning News on Tuesday night that it was his decision to do away with the anthem and that other teams were told of his decision without objection. The Athletic also reported that NBA commissioner Adam Silver was made aware of the decision.

The team didn’t announce the decision, and it hadn’t been a point of contention without fans on hand. On Monday, free tickets to the game at American Airlines Center were given to about 1,500 front-line workers who had received at least their first dose of the COVID-19 vaccine.

“Your decision to cancel our National Anthem at @dallasmavs games is a slap in the face to every American & an embarrassment to Texas,” Patrick, a Republican, wrote. “Sell the franchise & some Texas Patriots will buy it.”

While NBA rules require players to stand for the playing of the anthem, Silver hasn’t enforced that regulation. NBA players were particularly outspoken about using the anthem as a time for protest last summer in the midst of social unrest following the killing of George Floyd.

Silver said in December regarding standing for the anthem, “I recognize that this is a very emotional issue on both sides of the equation in America right now, and I think it calls for real engagement rather than rule enforcement.”

Cuban came out last year in favor of players taking a knee during the anthem. He told ESPN in June 2020, “If they were taking a knee and they were being respectful, I’d be proud of them. Hopefully I’d join them.”