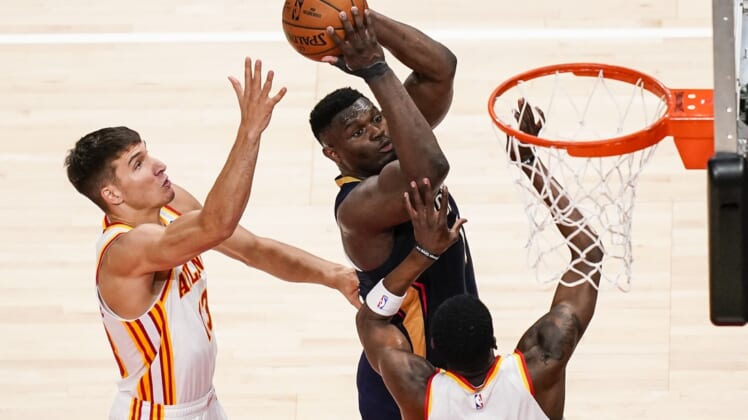 What second-year New Orleans Pelicans forward Zion Williamson has done thus far this season is nothing short of extraordinary. The freakish 20-year-old former No. 1 pick is averaging 26.8 points, 7.2 rebounds and 3.7 assists on an otherworldly 61% shooting from the field.

Williamson has been even more dominant as of late, averaging 29.2 points over his past 29 games. At 6-foot-7 and 284 pounds, he’s an absolute load for opposing defenses to deal with.

In talking with former NFL star Shannon Sharpe on the Club Shay Shay podcast, Zion Williamson noted that he believes he could make it on the gridiron.

“Yeah, I believe I could. I’m just a competitor,” Williamson said. “I think I would either do tight end or receiver. One of those two.”

A 284-pound wide receiver would certainly be something. With that said, Williamson’s athletic ability seemingly translates well to the NFL if he decided to be a two-sport star.

There’s nothing out there suggesting that Williamson is even looking at the possibility of playing in the NFL. Even then, it’s fun to draw comparisons. As we’ve seen throughout his young NBA career, the former Duke star has unrivaled hops. He’d be a dynamic red-zone threat.

Another former college basketball star in that of Pro Football Hall of Famer Tony Gonzalez might be a solid comparison. The 14-time Pro Bowler stood at 6-foot-5 and weighed roughly 247 pounds during his career. He also tallied a ridiculous 111 touchdown catches during that span — good enough for eighth all-time.

A more-recent comparison for Zion Williamson would be former Florida tight end and likely top-10 pick in the 2021 NFL Draft, Kyle Pitts. He’s seen as a generational talent at the tight end position. Pitts also comes in at 6-foot-5 and 245 pounds while running a blazing 4.44 40-yard dash.

Either way, we’d be dumb to discount Williamson’s ability to dominate in the NFL if he opted to play two sports. For now, that’s a mere pipe dream.