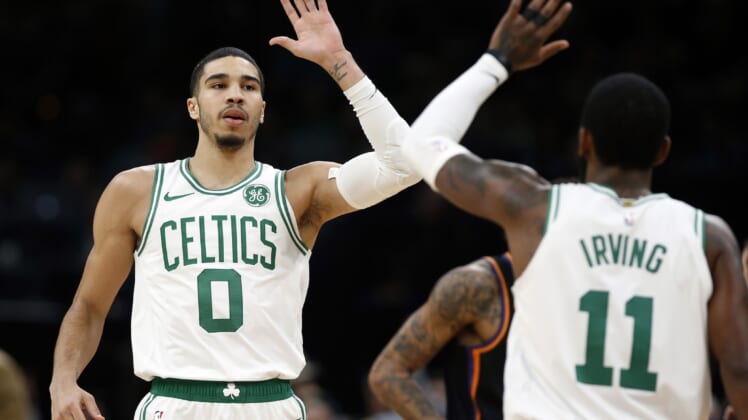 The Boston Celtics are heading home from the bubble after being eliminated from the NBA Playoffs for the sixth consecutive year. Unfortunately, it might not be the only reason for the Celtics to be concerned.

With the Celtics set to build around Jayson Tatum as their long-term star for years to come, the 22-year-old forward is apparently being mentored by a former star who burned bridges in Boston.

The Celtics landed Kyrie Irving in 2017, hoping he would lead the team to championships and spark the organization’s next dynasty. Instead, the All-Star point guard lasted just two seasons in Boston, before leaving for the Brooklyn Nets.

When he left, the organization and fan base were happy to see him walk, with details coming out about his ‘awful’ relationship with the team and its young core. Now, after finding his way out of Boston, Irving seems to be mentoring the city’s biggest star and the face of its most beloved team.

“The 22-year-old has been trying to take on more of a leadership role, something he’s been getting advice [on] from — wait for it — yes, Kyrie Irving,” ESPN’s Rachel Nichols reported before Sunday night’s Game 6, via NBC Sports Boston. “Kyrie has been calling Jayson occasionally through his time bubble to talk, offer advice.”

Losing out an opportunity to play in the NBA Finals, with Boston’s last NBA Finals appearance coming in 2009-’10, was already painful for Boston’s sports fans. Learning that Irving is now serving as a mentor for Tatum likely makes the end to this season even worse.

Tatum is quickly on the rise, becoming one of the NBA’s top players. He stepped up in the postseason, averaging 25.7 points and 10 rebounds per game for the Celtics. His play on the court has earned the max contract he is expected to land in the coming months.

It’s evident that Irving is already influencing Tatum. Brooklyn’s star guard was one of the leading voices before the NBA restart in calling for play to stop, with players instead focusing on social reform. Just two months later, Tatum took part in the early NBA Playoff boycotts and emphasized that basketball wasn’t important at such a critical time in the United States.