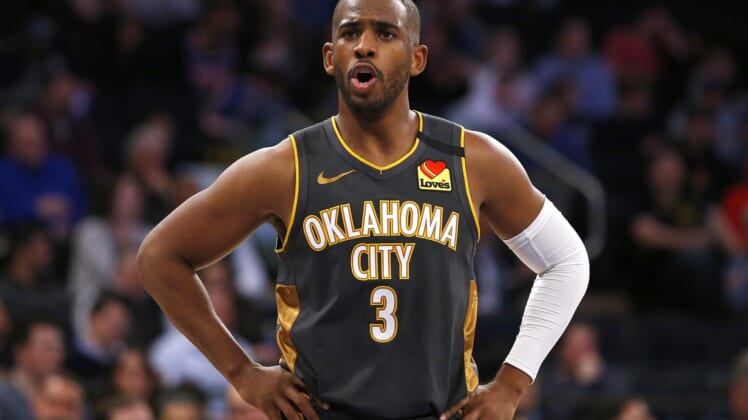 First-year New York Knicks president Leon Rose is attempting to make waves in his first offseason in that role.

It was previously noted that Rose, a former player agent, wanted to blow up the Knicks’ roster after yet another down season in the Big Apple.

We now have more information on this. It’s rather interesting, too.

Brandon Robinson of Heavy.com is reporting that New York already has a package put together for the future Hall of Fame guard. Here’s how it would look.

That would seemingly be a high price to pay for a 35-year-old guard in the back end of his career. There’s also financial issues as it relates to acquiring Paul, something that has turned other teams off since he was traded from Houston to Oklahoma City.

Paul is set to earn a combined $85-plus million over the next two seasons. He has a player option for $44.2 million in 2021-22. Paul is more than likely going to exercise said option.

Again, this is a huge amount of money for a player that likely only has a couple more years of good basketball left him him. With that said, Paul continues to play at a high level.

Chris Paul had a career rebirth in Oklahoma City

Pretty much a salary throw in as part of the Russell Westbrook blockbuster trade ahead of the 2019-20 season, Paul was absolutely brilliant for the Thunder this past season.

The question here is whether Paul would even want to be moved to the Knicks. Short of the team adding another star player, New York remains in rebuild mode. Pretty much on his last legs, would Paul want to join a team that’s nowhere near championship contention?

As for the Knicks, trading two young players and a valuable first-round pick for a 35-year-old guard really doesn’t seem to make a whole lot of sense. That said, these are the Knicks we’re talking about. Nothing would surprise us.