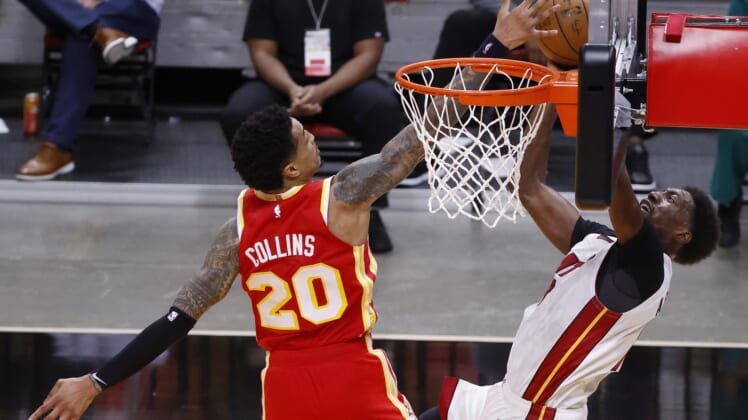 NBA rumors are swirling with the trade deadline approaching and while championship contenders generate most of the buzz, one Western Conference team might be the most aggressive to land Atlanta Hawks forward John Collins.

Collins, the No. 19 overall pick in the 2017 NBA Draft, has been an integral player for Atlanta since entering the league. But he’s a restricted free agent this offseason, potentially headed for a max contract. While the Hawks have the right to match any offer he receives, that’s more difficult after they spent heavily in NBA free agency this past offseason.

An expiring contract isn’t the only problem in Atlanta. Collins and star guard Trae Young got into a confrontation earlier this season, with the 23-year-old forward frustrated by his lack of involvement on offense. With the Hawks committed to Young, Collins could be on his way out by the NBA trade deadline.

During an appearance on The Bill Simmons Podcast, NBA insider Jackie MacMullan said the Minnesota Timberwolves are “dying” to trade for Collins before the deadline on March 25.

Minnesota’s desire to upgrade at power forward is known throughout the league. The organization wants to find a complementary big man with athleticism who can play alongside Karl-Anthony Towns. Conveniently, per Darren Wolfson via SkorNorth.com, Collins likes the idea of teaming up with KAT.

Related: John Collins blockbuster deal could be on the horizon

It’s an added bonus if the Timberwolves trade for him, especially once they pursue a long-term contract. Acquiring Collins now would give the 6-foot-9 forward time to gel with KAT and head coach Chris Finch could start finding ways to help the athletic four fit into Minnesota’s system.

Collins isn’t putting up the stats that made him a breakout player in the previous two seasons. Across 102 games from 2018-’20, he averaged 20.3 points, 9.9 rebounds and 1.0 blocks per game. He also showed nice touch from outside, hitting 37.4% from beyond the arc.

It hasn’t been quite the same this season. Not only have the Hawks failed to meet their own expectations, but Collins’ stats have taken a hit. Through 38 contests, he is averaging just 17.8 points and 7.6 rebounds per game, with center Clint Capela dominating the boards and Young controlling the ball.

As for a potential return, that’s where things get more complicated. There will be plenty of teams interested in acquiring Collins, confident he can thrive in their system. While that creates some leverage for Atlanta, there is also the risk of Collins leaving in free agency. While they could fall back on the threat to match any offer he receives, the Bogdan Bogdanovic saga from this past offseason is a lesson that those deals can backfire.

In terms of a return, the Hawks are seeking a lottery pick in the 2021 NBA Draft or a young player with high upside. Minnesota’s first-round pick carries top-three protection, but it will go to the Golden State Warriors in any other scenario. If that happens, Golden State owns the rights to Minnesota’s 2022 first-round selection.

Atlanta might ask the Timberwolves for Anthony Edwards, depending on how badly the team really wants John Collins. If he is off the table, a trade package will likely need to start with an unprotected 2023 first and 2020 first-round pick Jaden McDaniels.