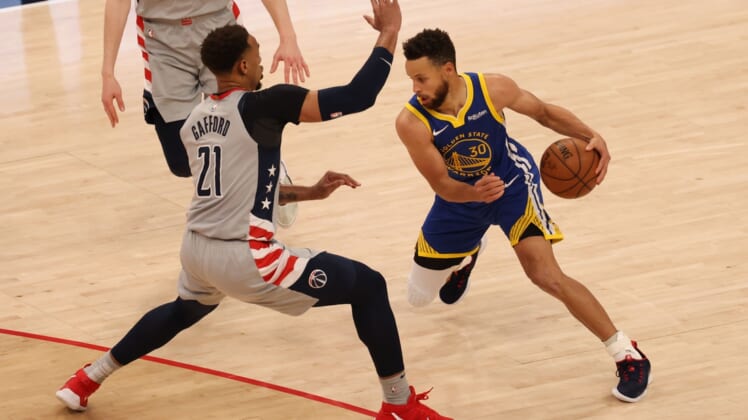 The streaking Washington Wizards harassed Stephen Curry into 7-for-25 shooting while getting 29 points from Bradley Beal and a triple-double from Russell Westbrook in a 118-114 victory over the visiting Golden State Warriors on Wednesday night.

Westbrook finished with 14 points, a game-high 20 rebounds, and 10 assists, though he turned the ball over nine times. The Wizards earned their season-high sixth consecutive win while handing the Warriors just their second loss in the past seven games.

The expected shootout between the NBA’s top two scorers fizzled because Curry experienced a rare off night. He missed his first seven 3-point attempts and had only four points at halftime before finishing with 18, his fewest since March 17. Curry had averaged 42.8 points in the first four games of the Warriors’ now-completed trip.

Bertans and Daniel Gafford chipped in with 19 points apiece and Raul Neto contributed 18 for the Wizards, who completed a 4-0 homestand. Oubre had 24 points and nine rebounds and Jordan Poole scored 22 for Golden State.

Julius Randle scored 13 of his 40 points in the final 11 minutes — six minutes of regulation and the overtime period — for host New York, which remained red hot by storming back from a 11-point deficit to beat Atlanta.

The Knicks scored the first 10 points of overtime to survive a battle of attrition, lock up their eighth straight win — the franchise’s longest winning streak since March 2014 — and move past the Hawks into fourth place in the Eastern Conference.

Derrick Rose and Immanuel Quickley each had 20 points off the New York bench. Hawks star Trae Young had 20 points and 14 rebounds before exiting for good in the third quarter due to a sprained left ankle.

Chris Paul compiled 28 points and eight assists to lift Phoenix over host Philadelphia, which has lost consecutive home games for the first time all season.

Devin Booker added 19 points and Mikal Bridges had 18 for the Suns. Booker had scored at least 30 in each of his past seven meetings with the Sixers. The Suns hold the best road record in the league, 19-7.

Joel Embiid led the Sixers with 38 points and 17 rebounds, and he nearly missed a nearly full-court shot at the final buzzer. Philadelphia was without Ben Simmons (illness), Seth Curry (hip) and Tobias Harris (knee).

OG Anunoby scored 25 points for the Raptors, who have won both games against the Nets this season with one more to play. The Raptors have won 11 straight home games over the Nets. Fred VanVleet added 17 points and Kyle Lowry added 14 points, seven rebounds and five assists.

Kyrie Irving had 28 points, 11 rebounds and eight assists for Brooklyn. The Nets were without Kevin Durant (thigh) and James Harden (hamstring). Toronto’s Chris Boucher, who had four points and seven rebounds in 11 minutes, left the game early in the fourth quarter due to a left knee sprain and did not return.

Playing short-handed and trailing by as many as 18 points, host Los Angeles fought back to defeat Memphis for its third consecutive win and its 10th in 11 games.

Ja Morant paced the Grizzlies with 22 points and four assists as Memphis fell to 2-2 on a seven-game road trip. Jaren Jackson Jr. scored 15 points in his season debut, returning from a serious knee injury.

Luka Doncic came within one assist of a triple-double with 30 points and 10 rebounds, Jalen Brunson came off the bench to add 20 points, and host Dallas pulled out of a skid to beat Detroit.

Jalen Brunson shot 8 of 12 from the floor overall as the Mavericks went 46 of 92 (50 percent) as a team. Detroit slightly outshot Dallas at 50.6 percent but made six fewer field goals.

Detroit trailed by as many as 17 points in the fourth quarter but pulled within eight on a pair of Cory Joseph free throws with 3:26 remaining. Joseph matched a season high with 24 points, and Jerami Grant led the Pistons with 26 points.

Sexton made 11 of 17 shots from the field and was one of five Cavaliers to score in double figures. Darius Garland also had 25 points on 8-for-13 shooting as Cleveland snapped a three-game losing streak.

Lauri Markkanen led Chicago with 16 points off the bench while Thaddeus Young and Coby White each had 14 points. Young also had eight rebounds.

Joe Ingles and Jordan Clarkson combined for 10 3-pointers as Utah overwhelmed host Houston from the perimeter.

Ingles finished 6-for-10 from behind the arc for 21 points while Clarkson scored 22 points off the bench on 4-for-9 3-point shooting as the Jazz, first in the NBA in 3-pointers made and attempted per game, went 17-for-46 from deep.

Will Barton scored 14 points and Aaron Gordon and Facundo Campazzo had 12 each for Denver. Austin Rivers, signed to a 10-day contract on Tuesday, had five points in his Nuggets debut.

Portland’s Damian Lillard scored 22 points in his return from a three-game absence. Norman Powell had 17 points but missed a shot at the buzzer that would have won it for the Trail Blazers, who instead lost their third game in a row.

Malcolm Brogdon scored 29 points to lead Indiana to a win over Oklahoma City.

Bam Adebayo scored 23 points and Jimmy Butler added 18 points and 11 assists as visiting Miami pulled away in the second half in a rout over San Antonio.

Tyler Herro put up 22 points, 14 in the fourth quarter, for the Heat. Duncan Robinson added 10 points for Miami, which has won three straight games. The Heat played without starting guard Victor Oladipo, who was held out because of right knee soreness.

Buddy Hield drilled the go-ahead 3-pointer with 8.8 seconds left as host Sacramento defeated Minnesota to salvage the second contest of a back-to-back between the teams.

De’Aaron Fox recorded 30 points and seven assists, and Hield made seven 3-pointers as part of a 29-point effort as the Kings prevailed for just the second time in the past 12 games. Sacramento outscored the Timberwolves 26-12 over the final 5:48.

Karl-Anthony Towns scored 26 points and reserve Naz Reid added 24 on 11-of-15 shooting as the Timberwolves again failed to post back-to-back victories since winning their first two games of the season.