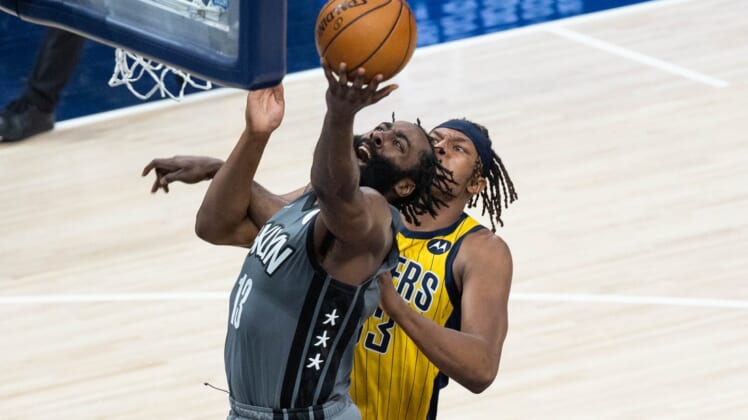 James Harden totaled 40 points, 15 assists and 10 rebounds as the Brooklyn Nets rallied in the fourth quarter and continued their surge with a 124-115 victory over the Indiana Pacers on Wednesday night in Indianapolis.

Brooklyn won its sixth straight game, extended its franchise-record road winning streak to eight games and beat Indiana for the second time in its 14-1 tear since Feb. 9. The Nets overcame a 16-point, second-quarter deficit and chipped away at it before surging ahead in the final 12 minutes.

Harden produced his first 40-point game with the Nets and his 11th triple-double — one shy of Jason Kidd’s single-season franchise record (2006-07). Joe Harris added 19 for the Nets, who sat Kyrie Irving (groin) for precautionary reasons.

Malcolm Brogdon scored 24 points for the Pacers, who lost for the seventh time in nine games and dropped their sixth straight home game. Caris LeVert added 19 in his home debut while Domantas Sabonis totaled 18, 11 rebounds and 11 assists for his 10th career triple-double.

Giannis Antetokounmpo had 32 points, 15 rebounds and five assists and Milwaukee rallied from a 19-point deficit to defeat host Philadelphia and win its fifth game in a row.

Antetokounmpo scored 10 points in overtime, including a personal 7-0 run to seal the win. Donte DiVincenzo added 20 points and eight rebounds while Jrue Holiday scored 19 points for the Bucks.

Tobias Harris led the Sixers with 19 points and nine rebounds, and Danny Green hit six 3-pointers for 18. Dwight Howard had 13 points and 15 rebounds, and Ben Simmons had 13 points, 10 rebounds and 12 assists. The Sixers, who fell to 4-6 without injured All-Star Joel Embiid, had their six-game winning streak snapped.

Denver’s Will Barton scored 23 points, and Jamal Murray had 19.

Terry Rozier led Charlotte with 21 points and Malik Monk added 16, all in the fourth quarter when the game was out of reach. LaMelo Ball contributed 14 points for the Hornets, whose four-game winning streak ended.

Morant, whose 13 points tied for a team high, beat five-time All-Star Jimmy Butler on the layup, dribbling the length of the court to snap an 85-85 tie. Miami’s Bam Adebayo then turned the ball over on a risky pass underneath, and Kyle Anderson sank two game-clinching free throws.

Anderson and De’Anthony Melton also had 13 points for the Grizzlies, and Dillon Brooks scored 10. Butler put up a game-high 24 points. Adebayo had 15 points, 12 rebounds and six assists in just his second game back from a knee injury. Miami had its six-game road winning streak and its five-game overall winning streak snapped.

Luka Doncic scored 42 points, his fourth game with at least 40 this season, as host Dallas beat Los Angeles to earn a split of a two-game set between the teams.

Tim Hardaway Jr. had 15 points as the Mavericks won two days after a 109-99 defeat to the Clippers. Doncic added nine assists and shot 16 of 28 from the field while Kristaps Porzingis had 11 points and 13 rebounds.

Paul George scored 28 points and Kawhi Leonard added 20 as the Clippers lost for the fifth time in their past seven games and went 1-2 on a quick road trip to New Orleans and Dallas.

Sexton shot 10-for-20 from the field and a perfect 7-for-7 from the free-throw line while Darius Garland had 25 points on 9-for-16 shooting.

RELATED: This is how a Harrison Barnes trade to the Boston Celtics might look

The Celtics, who lost for the third time in their past four games, trailed by as many as 21 points during a sloppy first half in which they were held to 38 points and committed 12 turnovers. Jayson Tatum scored 24 of his 29 points and Jaylen Brown scored 21 of his 28 in the second half as Boston got within 110-105 in the final minute.

De’Aaron Fox rescued Sacramento with seven late points, including a tiebreaking 19-footer with 1.3 seconds remaining that provided the difference in a victory at Washington.

Fox scored Sacramento’s final nine points in all to cap a team-high 28-point night that helped the Kings snap a two-game losing streak.

Bradley Beal had a game-high 29 points and Russell Westbrook his 158th career triple-double as the Wizards who dropped their fifth straight. Westbrook finished with 26 points, a game-high 14 rebounds and a game-high 10 assists.

The old franchise mark of 17 straight losses was set by the San Diego Rockets from Jan. 18-Feb. 16, 1968. Kevin Porter Jr. led the Rockets with 25 points and seven assists, and Christian Wood added 21 points and nine rebounds) in his return from missing 17 games with an ankle sprain.

Kelly Oubre Jr. added 19 points, Andrew Wiggins had 17 points and Draymond Green added a triple-double of 16 points, 12 rebounds and 10 assists for Golden State. The Warriors received 18 points and eight assists from Stephen Curry — who missed 9 of 11 3-point attempts — before he limped to the locker room at the conclusion of the third quarter.

Saddiq Bey had 28 points and 12 rebounds and host Detroit ended a four-game losing streak while sending Toronto to its sixth straight defeat.

Jerami Grant contributed 23 points and Delon Wright supplied 18 points, 10 rebounds and eight assists for the Pistons. Norman Powell poured in a career-high 43 points for the Raptors, who also got 21 points from Chris Boucher and eight points and 15 assists from Kyle Lowry.

Raptors starters Pascal Siakam and Fred VanVleet returned to action after missing six and five games, respectively, due to the league’s health and safety protocols. Siakam finished with 13 points and VanVleet added 12.

The Spurs outscored the Bulls 39-19 in the fourth quarter to win for the third time in four games. Chicago, meanwhile, again squandered a big advantage as it closed a five-game homestand at 2-3.